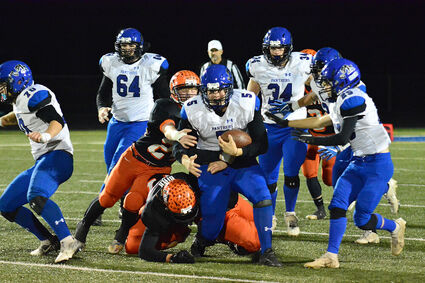 In early October, South Ridge lost 20-12 to Ogilvie. On Friday, the teams met again, but this time they were playing for the Section 5 nine-man championship. The Lions pounced on the Panthers this time, pulling away to a 42-0 win and securing the section title.

"They hit us with a big passing play early," said South Ridge coach Brent Johnson. "We just haven't reacted well all season when we get down early."

The big play was a Bryce Nelson 50-yard touchdown pass to Ryan Schumacher that gave Ogilvie an 8-0 lead after a 2-point conversion by Noah Bitz, and that's how the first quarter ended.

Things got even more difficult for the Panthers in the second quarter as they gave up two more touchdowns. The first Ogilvie score in the quarter was Bitz popping into the end zone from 10 yards out, followed by Nelson tacking on a 2-point conversion run for a score of 16-0. The second score was another Nelson-to-Schumacher pass for 3 yards. It was 24-0 at halftime.

"Our whole season has been kind of up and down," said Johnson, adding that they lost the first two games of the year and were 3-4 going into the playoffs.

Unfortunately, the Panthers suffered a pair of significant injuries to twins Jaxon and Aaron Bennet. Jaxon, the running back, had his season come to a close in a game against McGregor and was not available for the last game of the season or the playoffs. Aaron, the star quarterback, got hurt in the third quarter of Friday's loss to Ogilvie. Those two injuries along with a season-long, nagging shoulder problem for lineman Joe Stokke took a toll on South Ridge as the season progressed.

"We tried to respond to Ogilvie and at times we would get a little something going, but then we weren't consistent," Johnson said. "We decided to try and spread things out and would make a nice play or two and then we couldn't connect on the passes." 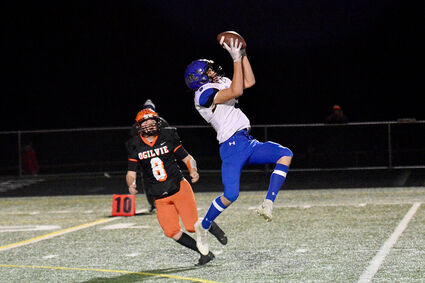 Aaron Bennett led the Panthers with 85 yards passing in a nine-for-25 performance. He also tacked on 25 rushing yards to lead his squad in that department.

Ogilvie put up 443 yards of total offense compared to 124 for the Panthers.

"It was nice to get to the section title game," said Johnson. "I don't think a lot of teams thought we'd get that far after having those two losses right at the start of the season, so the guys fought back and got rewarded for how hard they worked."