The Esko team celebrates after a wild win in Duluth last week and a section championship.

Prior to Esko's Section 7AAA championship game against Aitkin, Eskomos head coach Scott Arntson told anyone who would listen to him that the game would be a dogfight. He based his thoughts on the fact that when the two teams met earlier in the season, Esko managed to sneak out a 2-point win.

Arntson was right. The Eskomos pulled out another close win Thursday when they booted a field goal, making the final 17-14 and sending Esko to the state tournament.

"It was a good game and that was exactly what we expected going into the game," said Arntson. "Nothing surprised me."

Playing at the University of Minnesota Duluth and Maloskey Stadium, the Eskomos wasted little time in taking a lead on a spectacular play by Koi Perich - who raced 69 yards for a touchdown, making it 7-0 after an extra-point kick by Wyatt Stankiewicz.

"Koi is simply a great player when you can isolate for him. If he gets in space he's pretty dynamic," said Arntson. "What a lot of people didn't realize is that Devonte Gregory made a big block on that play."

Another second-quarter score by the Eskomos gave the appearance the game was going to be a blowout. Nolan Witt slammed into the end zone from 6 yards out and Stankiewicz tacked on the extra-point kick, pushing the lead to 14-0.

Arnston was proven prophetic when the Gobblers scored on an 8-yard pass after a turnover by Esko, pulling the Gobblers to 14-6 after the Eskomos snuffed out a 2-point conversion run.

"We turned the ball over and they had a short field and they put it in," said Arntson. "I looked up at the scoreboard and thought to myself, 'Here we go, we're in a game now.'"

Late in the third quarter things got even more interesting after the Gobblers added a 38-yard touchdown run that tied the game after the 2-point conversion run.

"As I said before we knew that even though we were up early that Aitkin would be there at the end," said Arnston. "They are just a tough team to play."

Esko needed a big drive to find a way to slow the methodical push of the Gobblers and they got it midway through the fourth quarter on a couple of big pass completions to Carter Zezulka and Koi Perich.

"We kept shooting ourselves in the foot, but those two big catches got us out of trouble," Arntson said.

Eventually the Eskomos got down inside the 5-yard line with five minutes left and a fourth-down decision to make.

"Really the decision was about what would happen if we made a field goal and the kickoff after that," said Arntson. "We knew that Wyatt (Stankiewicz) would probably make the kick and then he usually kicks the ball to the end zone on kickoffs, so we felt that they'd have to go 80 yards to score and we liked our chances, so that is what we did."

Stankiewicz knocked the field goal through, making it 17-14. 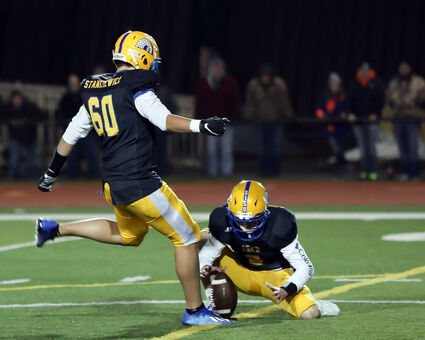 Esko's Wyatt Stankiewicz kicks what became a game-winning 20-yard field goal with quarterback Ty Christensen holding to put the Eskomos ahead 17-14 with 5:25 left in the fourth quarter.

"After we kicked off, we got a stop and we knew we could not turn the ball over to them again," Arntson said. "When we were talking on the sidelines as we went back out on offense, we were trying to figure out what are the safest plays we can run so we didn't give the ball back to them."

In the end, the Eskomos had just enough to pick up the win and will now play in the state tournament against an upstart New London-Spicer squad.

"They were 3-5 entering the playoffs," Arntson said. "Now they are 6-5 so they are playing their best football of the year."

The quarterfinal game will take place at 1 p.m. Saturday at Brainerd High School.

"The guys were ready against Aitkin and we were lucky enough to get just enough breaks to win," Arntson said.

This is Esko's second state appearance with Arntson as head coach.