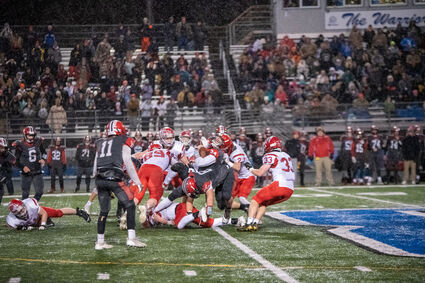 Moose Lake/Willow River players gang tackle a West Central Area runningback Saturday in a quarterfinal matchup in the state Class AA football tournmant. After a quick start by WCA, the game bogged down into a dogfight, with the Rebels unable to make up ground in a 14-6 loss.

The Rebels' undefeated football season came to an end at the hands of West Central Area/Ashby in the Class AA quarterfinals Saturday. The Moose Lake/Willow River team fell behind and fought back - only to come up short in the 14-6 loss in snowy weather at Brainerd High School.

"Every team that qualifies for the state playoffs is a great team full of strong, quick athletes," said Rebels coach Dave Louzek. "WCA was able to hit on the long passes in situations where they needed yards for first downs and touchdowns, and that was enough to get them the win."

Both teams played strong defense in the first quarter, but the Knights were eventually able to gain the lead on a Matson Hoff 3-yard touchdown run. The Rebels were able to snuff out the extra point attempt and that kept the lead at 6-0 after the first half.

"Their offensive line did a great job blocking," said coach Louzek. "That blocking gave their quarterback time to complete passes."

One of the timely and long passes came in the third quarter when they scored on a 25-yard pass to inch the lead up to 14-0 after a 2-point conversion.

The Rebels - known for piling up tons of yardage on the ground as well as scoring on long runs - struggled to find footing.

"Their defense did an outstanding job not giving up the long runs that our offense had become accustomed to during the regular season," said Louzek. 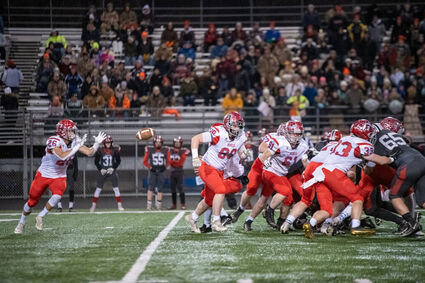 The Rebels could not get their vaunted running game going last week.

Jackson Thompson had a strong game for the Rebels running the ball. In 14 rushing attempts, Thompson compiled 112 yards rushing with a longest rush of 33 yards. Logan Orvedahl also did his part by rushing for 73 yards on 20 rushing attempts. Unfortunately for the Rebels, the team struggled to score points until Orvedahl slashed into the end zone in the fourth quarter on a 9-yard run that cut the gap to 14-6, but ML/WR failed the 2-point conversion attempt and trailed by eight points.

"We moved the ball well with Jackson Thompson and Logan Orvedahl gaining tough yards, but we were not able to finish drives in the end zone," said Louzek. "You have to give credit to WCA and their defense for making many big fourth down stops to end our drives."

The Rebels made a strong surge when they forced another turnover late in the game, but WCA was able to keep ML/WR out of the end zone and win the game in a final of 14-6.

Thompson, Orvedahl and Sam Knezevich led the Rebels defense with three tackles each.

WCA plays in the semifinals at U.S. Bank Stadium at 11:30 a.m. Friday against Maple River.