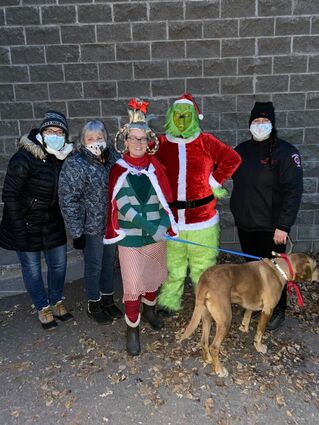 The Grinch and Cindy Lou started Saturday's holiday parade, and Santa and Mrs. Claus ended the parade. From left are Jody Acers and Mary Jane Lundberg from the Cloquet Education Foundation, Cindy Lou Who (Sara Ringat), the Grinch (Connor Hecht) and his dog, Max, along with CAFD's Sarah Buhs.

The snow came a day late but holiday spirits were high during the annual Santa's Home for the Holidays events last weekend in Cloquet. Whether enjoying stories by Mrs. Claus, eating s'mores, singing or watching the parades, people were actually eager for fun. 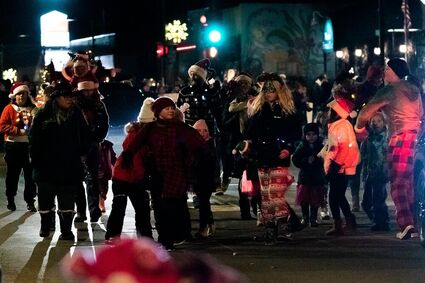 This year's Cloquet holiday parade had a larger than usual number of parade participants on foot, dressed in festive gear, some of them singing Christmas carols.

They were shopping too. Allison Jerde, coordinator of the Holiday Expo at Churchill Elementary School, said they had a steady stream of people visiting the 126 vendor booths there. "I think it was successful for what's going on right now," she said of the fair.

After last year's event was canceled due to the pandemic, the event's success "spoke to the community's need to get back together, said Cloquet city councilor Chris Swanson. "It was wildly successful and really fun to see the fireworks. Bravo to the organizers."

This was the first year that the Carlton County United Way ran the event.