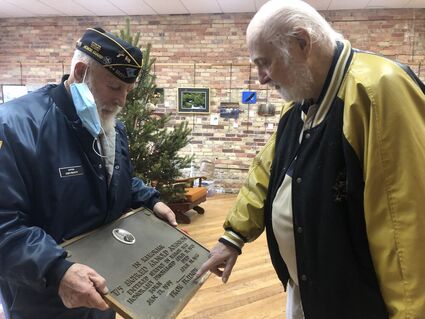 John Prouty, left, presents a long-lost plaque to Kenny Johnson Tuesday at the Pine Knot News office. The plaque, honoring Sigfred Johnson, was found in a car at a salvage yard.

Sigfred Johnson considered himself the "black sheep" of his family. It was likely because he liked to drink beer while most of his relatives were teetotalers. And there were a lot of them. Born in 1909 to Severin and Anna Johnson, Sigfred was in the middle of a pack of 12 children growing up on 22nd Avenue in Cloquet, where the city rubs against Scanlon's west side.

Sig, as he was known, worked for the city of Cloquet's sewer and water works department and had an outsized personality. He drank his beer at Jake's Place, today known as the Lost Tavern. Stories from patrons of Jake's have Sig...