In Carlton, lament over loss of school 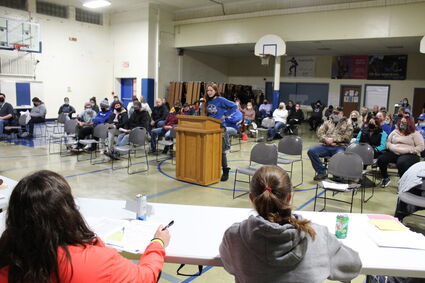 There were plenty of speakers at Monday's meeting in Carlton about an agreement with the Cloquet school district that would shut down the high school in Calrton. About 75 people attended the meeting with the Carlton school board Monday night.

More than 30 people spoke Monday in a last ditch effort to convince Carlton School Board members to keep the high school open and the district a preK-12.

Ostensibly, the public hearing at Carlton High School was about a proposed tuition agreement with Cloquet High School that both boards appear to favor. Under the terms of that agreement, Cloquet would guarantee acceptance of any Carlton student in grades 9-12 when the high school is closed there, possibly next year.

But the meeting was really about what Carlton means to the students there, the staff, the graduates - and what they feel would be lost if the high school is closed. Connections. Small class sizes. Teachers they've known for years. Trying things and knowing you won't be cut, because everyone makes it. Bulldog pride. Classmates you've known since preschool.

Emotions ran high, and people got choked up, even shed tears. Some pleaded with the board.

Students identified themselves by their first names only.

Kayla, who thrives at the small school, was adamant that she would not go to Cloquet.

"All my friends are here," the freshman said. "A lot of our teachers know every single student. Every teacher I've had has been there if I needed them. If I went to Cloquet, I wouldn't make the sports teams. I'm not super athletic, but if I want to play sports here, I can. If we did end up going to Cloquet ... I would probably consider other options, like PSEO. I would miss a lot of things, like homecoming dances."

Cora, a junior, also said she would choose a different school or PSEO. "If I wasn't going to Carlton I wouldn't make the same memories ... and PSEO seems like an option," she said tearfully.

Kennedy, another junior, said she wants to graduate from Carlton, like her dad and brothers.

"It's really hard to even think that I may not graduate from this school, and the connections I've grown through the years with my friends may disappear, and I may not be able to play sports next year. In Cloquet I won't have a chance. I would love to stay here."

Amy, a sophomore, has been going to Carlton since preschool. "I've made so many friends here ... and I feel like you get a lot more one-on-one interaction with the teacher," she said. "They definitely give you more attention and I feel like it's easier to learn in a smaller class. And I feel like a lot of things happen in Cloquet that I don't think are safe for the kids here."

Webster is a current student and a small farmer in the community. He talked about how easy it is to tell the difference between store bought eggs and the eggs that grow on his farm before making his point more directly.

"I think if you take one of these students that thrive in this school and put them over in Cloquet, I think you will see a difference in the education they are getting," he said. "I believe honestly there are students who would end up dropping out if you take this away from them. You're literally stealing their education, that's the way I'm looking at it."

Elisa, a junior, said she always dreamed of graduating from Carlton and sending her kids there. She is involved in many clubs and activities there. Moving to a larger school would be a struggle, she said. "Right now, with Covid-19, mental health is really bad right now and this is just making it worse."

Maddie, a 2020 grad, talked about how many things she was involved in and how her classmates are like a big family. "Students shouldn't have to worry about whether they will have a school," she said.

Both students and adults who spoke showed the board respect. Many expressed understanding that these are tough decisions for any school board member.

Those decisions are being made now - after trying and failing to pass a referendum for a new school, then exploring consolidation with Wrenshall - because the Carlton school district has seen decades of declining enrollment. More resident students have open-enrolled out of Carlton than have stayed there since 2016, according to district figures.

Earlier this year, Carlton superintendent John Engstrom addressed the reasons the Carlton district is pursuing the tuition agreement after a number of residents and students asked the board to stick with the K-12 model. It's not because they want to shut down the high school, he said, and it's not because they don't think Carlton kids need a better education. It's the budget. Carlton has been operating at an annual deficit of nearly $1 million a year, he said.

With the tuition agreement, Carlton students will have the option of attending a school with wider class options and different kinds of educational opportunities, as well as more extracurricular activities. At the same time, focusing on a preK-8 district preserves a school in Carlton within Carlton's control.

The board did not respond to comments during the public hearing Monday, other than to thank people for speaking, and sharing their thoughts.

The district did, however, offer everyone at the meeting Monday a large packet of information, containing everything from an eight-page FAQ handout to the text of the entire tuition agreement, along with Carlton enrollment figures since 2005-06.

Here are just a few of the statements in that packet:

-We believe we would be able to offer a diverse and rich preK to eighth grade curriculum that would give all of our resident students many reasons to stay in Carlton for their primary education.

-Over the course of the last 15 years, the percentage of resident families who have chosen to attend other schools has increased from 36 to 60 percent.

-Most kids go to high schools that involve some type of remixing: two middle schools into a high school, or middle school and one or two small private K-8 schools coming together, etc. It's not a big deal. The kids are fine, really.

-If a smaller high school experience is what a student or family wants, then there are nearby options that fit the bill.

-Our hearts ache for the students who will be forced to change schools if this happens. We understand and empathize with all of the emotions associated with this. We are also extremely grateful that so many students and families do strongly support the school. Our hearts ache for what this place will look like within a year or two if we don't do anything besides cut and cut and cut some more.

Carlton's Ryan Schmidt is a Bulldog through and through. His father, aunts and uncles, siblings and kids all attended Carlton, just like he did. Schmidt teaches at his alma mater, he's been the athletic director, baseball coach and even served on the school board. So it wasn't anything new for him to be sitting in the small gymnasium at the school with a crowd of people facing the school board.

"This is a special place and these are special kids," he told the board, his voice cracking with emotion. "It has a chance of being a special place for a long time if you just give it to us."

Schmidt told the board of his worries that closing the high school will be bad for the elementary school too. He shared results of a Facebook poll he created, asking elementary parents what they will do if the high school closes.

Out of 39 responses representing 62 students, 11 said they would immediately pull their (combined) 40 kids out of Carlton.

"If we do something to keep the school as it is, we're not going to lose those students that want to be here," he said. "We give them that stability that everyone's been talking about."

"This is the center of the community," he said. "It makes people emotional because they love this place. I've grown to love it. Give it a little bit of time ... let's give it a few years to see if we can start bringing some kids back." 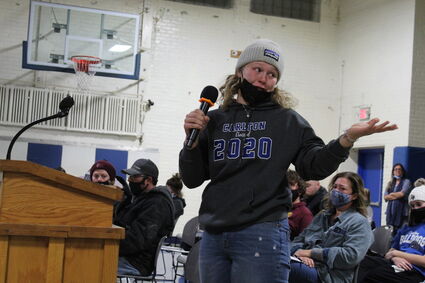 Carlton grad Maddie (no surname given)

If both districts and the state of Minnesota approve the agreement, next the schools would begin the process of registering Carlton students in grades 8-11 for the next school year. Students can, of course, choose to open-enroll in other neighboring school districts.