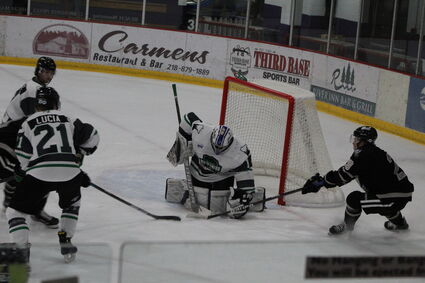 Wilderness goalie Graham Burke stops the puck despite persistent efforts by Jack Whitmore of the St. Cloud Norsemen during Friday night's game at Northwoods Credit Union Arena. Burke started the game for the Wilderness, but suffered an injury just before St. Cloud's fifth goal, and had to be replaced by Jacob Zacharewicz. Zacharewicz stopped all nine shots he faced in relief, while Burke finished with 20 saves on 25 shots.

In the early weeks of November, the Minnesota Wilderness were in the hunt in the North American Hockey League Midwest Division with a record of 13-7. Things were looking good, considering the squad featured a ton of young talent with a high ceiling for improvement.

Now, just a month later, the team is winless over its last seven games and is struggling to find bodies due to a series of unforeseen circumstances.

"It's been a tough run lately," said GM and coach of the Wilderness, Dave Boitz. "It's kind of been just one thing after another."

Murphy's Law, that "anything that can go wrong, will go wrong" has been the case with the Wilderness.

"We had the top two forwards in the league," said Boitz. "William Persson and Ethan Wolthers are two of the best, if not the best, forwards in our league and we lost them both for various reasons."

Persson is not currently with the team because he had to return to his native Sweden to get a visa problem straightened out. Wolthers suffered an ankle injury, so he was out of the lineup. To top it off, the Wilderness also lost another top forward, Haden Kruse, to a crushed heel when he was picked up to play a few games in the United States Hockey League.

"Those are three very good players," said Boitz. "We also lost Matt McQuade to sickness and Logan Anderson to injury. We lost our four top scorers on the power play and that slowed our power play down as well. With all those power play guys out, it has thrown things off a bit for us."

The Wilderness have also struggled mightily on defense. They have given up a league-high 117 goals.

"Early on in the year we were winning games by scores of 6-5, just high-scoring games, so even then we were struggling to keep the puck out of the net," Boitz said. "On the blue line, we have a group of very offensively talented defensemen who sometimes jump into the play when they probably should hang back. In goal we need to get more out of our goalies; they just haven't played up to the level we need them to be."

Last weekend the Wilderness lost to the St. Cloud Norsemen 5-1 at home on Friday, their lone goal via Cole Crusberg-Roseen. Normally a defenseman, Crusberg-Roseen was in the lineup as a center Friday, and he scored with 6:07 left in the third period. Niko Rexine and Ian Duffy, playing in his first Junior A game, assisted on the tally. Wilderness goalie Graham Burke started the game for the Wilderness, but suffered an injury just before St. Cloud's fifth goal and had to be replaced by Jacob Zacharewicz. Zacharewicz stopped all nine shots he faced in relief, while Burke finished with 20 saves on 25 shots.

On Saturday at St. Cloud, the Wilderness fell 5-0 in their first shutout loss of the season. The Norsemen outshot Minnesota for the game, 24-23. Zacharewicz took the loss in net, stopping 19 of 24 shots. The Norsemen are coached by Cloquet grad Corey Millen, who was previously a Wilderness coach.

Despite the loss of top forwards, the Wilderness are still ranked No. 5 in NAHL scoring, but that just magnifies their lack of ability to keep the puck out of the net.

"This weekend is extremely important for us if we want to get back into the playoff picture," said Boitz. "We play Friday, Saturday and Sunday against Anchorage, which is five points ahead of us in the standings. If we have a good weekend, we can really make a move for that last playoff spot." 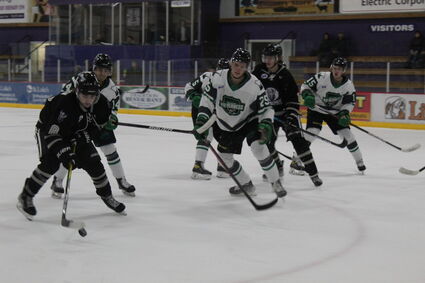 Anchorage currently sits in third place in the Midwest Division with a total of 32 points, while the Wilderness are in sixth place with 27 points. A sweep for the Wilderness would drive them up the standings in a hurry.

"Right now it is all about staying positive and trying to find ways to get back on track," Boitz said. "Despite how things have gone, the guys have stayed positive and we don't have any bad attitudes. It would be nice to get some momentum this weekend at our home rink and find a way to get a win streak going."

All three games are at home this weekend, with starting times at 7:15 p.m. on Friday and Saturday and 3:15 p.m. Sunday afternoon at Northwoods Credit Union Arena. After this weekend, the Wilderness will take a break for the holidays and play at home again Dec. 31.