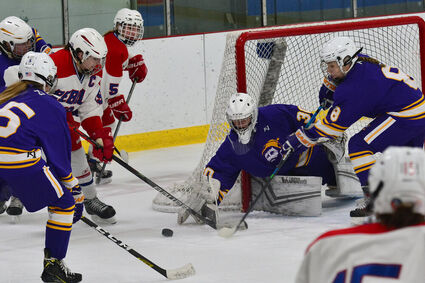 CEC goalie Araya Kiminski bats a puck away through a mix of Moose Lake attackers and Lumberjacks defenders as she earned her first shutout of the season in a 1-0 victory Thursday.

A goal just 32 seconds into the game turned out to be the only goal in Thursday's girls hockey game between Cloquet-Esko-Carlton and Moose Lake Area. Marina Dostal scored for CEC before many fans got a chance to get into their seats at Riverside Arena in Moose Lake, giving the Lumberjacks the narrow road win.

"The team did a great job setting the tone from the start with really nice, patient puck possession which led to the lone goal for us," said CEC coach Courtney Olin.

The teams met Nov. 23 in Cloquet and the Lumberjacks also won that game by one goal, 2-1.

"Usually we want to start fast, but unfortunately CEC started out fast on their first shift. It was a shot from the point and a really nice tip from the high slot," said Rebels coach Reilly Fawcett. "We are usually pretty good about getting into shooting lanes but that one missed our shin pads by about an inch. We had our chances, but we just couldn't capitalize."

"I think for any spectators in the arena, it was a really fun, great-paced game which makes for a great game, to watch," Olin said. "You have to give MLA credit, they work extremely hard even though they have low numbers in their program and are a team that deserves credit!"

Marina Dostal scored the lone goal of the game for CEC with assists going to Tenley Stewart and Emma Parks.

Both goaltenders played well. Araya Kiminski of CEC posted a shutout by stopping all 18 shots she faced.

"Araya did a nice job playing solid in net and taking away any quality scoring opportunities that they had," said coach Olin. "She was well deserving of her first shutout of the year."

On the other end of the ice, MLA goalie Mallory Hartl was also exceptional. 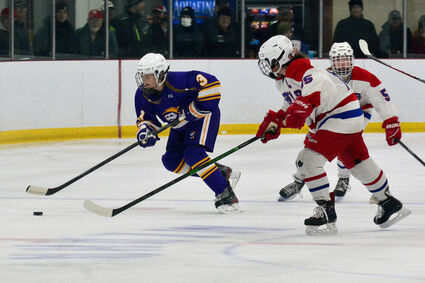 "Mallory was huge for us and came up with a lot of great saves," said Fawcett. "She has been solid all season and we trust her back there. We know we can rely on her in games like these. One thing that we wanted to focus on is playing [well] in front of her in the defensive zone and not letting them get any Grade A chances, which I thought we did a really good job at throughout the game."

Hartl finished with a total of 24 saves on 25 shots.

After being beaten by CEC 1-0 on Thursday, the Rebels rebounded Saturday with a 10-1 rout of International Falls. The Lumberjacks traveled to Sartell/Sauk Rapids on Saturday and won a 5-2.

The Lumberjacks are now 6-5. The Rebels are now 8-2 on the season with their only two losses to CEC.