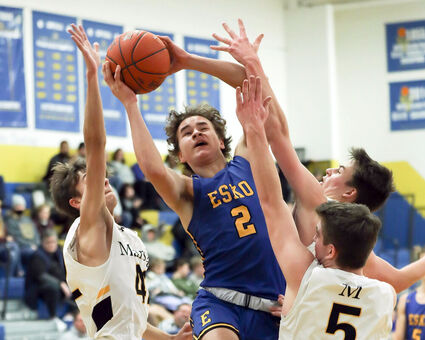 Esko and Duluth Marshall faced off in the championship game of the Esko Coaches Classic boys basketball tournament last week, with the Eskomos rolling to a 73-44 win.

The Hilltoppers gained entrance into the championship game via a forfeit win over Nashwauk-Keewatin, the result of bad travel conditions for the Spartans. The Spartans were able to travel to Esko on Wednesday where they defeated Hinckley-Finlayson 68-48 to capture third place.

In Esko's first-round win over the Jaguars things started a bit slowly, but the Eskomos soon got their offense untracked and rolled to an easy win.

The Eskomos led the game 36-22 at halftime, but in the second half fell into a scoring rhythm that saw them tally 46 points, most of which came from the paint and in transition baskets.

Carter Zezulka and Mason Perich both scored three points and it was two each for Adam Rudnicki and Chad Hart.

"I am pretty happy about how we are playing right now," said Anderson. "We've got some younger guys who are learning from the seniors, and it helps that they got a lot of time last year."

On Wednesday night the Eskomos left little doubt that they would win their eighth game of the season. They rolled to a 40-24 halftime lead and kept their foot on the gas pedal as they powered their way to the 73-44 championship victory.

"We played them quite a bit this summer and knew they came in with a solid team that could all shoot the 3-pointer," Anderson said. "We also know that Jasper Timm is a solid player, so we tried to focus on making things difficult for him."

Timm, a 6'3" senior forward who averages well into double digits in scoring, was held to just nine points in the game by the Eskomo defense.

Offensively, the Eskomos were able to handle anything the Hilltoppers threw at them. Koi Perich led Esko with 22 points. Cuinn Berger also had a big night with 17 points, and Nick Swanson also was in double digits with 10.

"Our defense played very well," Anderson said. "We executed our rotations well and tried to make it as difficult as possible for them. We ran mostly full court man-to-man but also mixed in some zone here and there. Nick Swanson did a very nice job of guarding Timm, but our team did a nice job of scrambling with urgency and running shooters off the 3-point line." 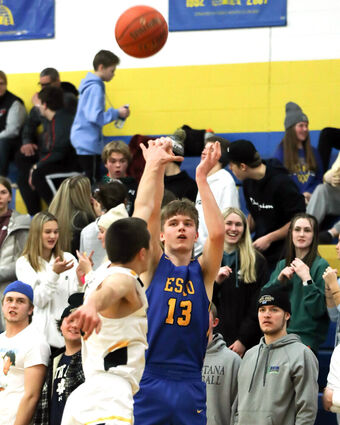 Esko continues to have plenty of scoring depth with 10 players scoring against Marshall. Joining the scoring column were Chad Hart with six, Brett Lillo, Mason Perich and Carter Herman with four each, Dalton Spindler with three, Brae Male with two points and Connor Lahti with one.

Ben Bergeron and Alex Olson led the Hilltoppers with 13 and 10 points respectively.

On Monday night the Eskomos played Proctor in Proctor and came away with another easy win, defeating the Rails 90-37. The win improved the Eskomos record to 8-1 and they are now ranked No. 8 in the Class AA state ratings.