For Dave Johnson, love made the world go round 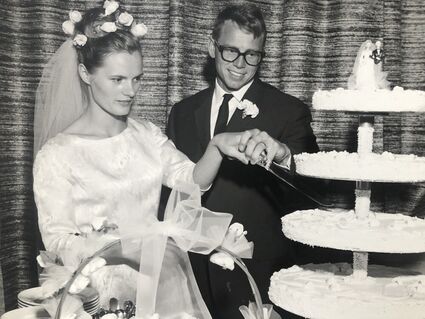 Dave and Rosa were married in Italy and lived there for four years before moving to Cloquet, but they traveled back almost every summer for long visits.

Cloquet lost one of its most charismatic and dedicated residents Saturday, when 81-year-old Dave Johnson died unexpectedly at home.

Although Johnson was born and raised here, he was very much a citizen of the world. With his beloved Rosa at his side, Johnson had one foot in Minnesota and the other in Italy. Italy was Rosa's birthplace, the place the couple met when Johnson was stationed at Aviano Air Base there.

Theirs was a grand romance, with obstacles to overcome and great joys as well.

Rosa talked about being introduced to Johnson by her twin brother, when she came home from Paris. It was his smile that drew her to him first.

"His teeth were so perfect and his eyes were so blue," Rosa said Wednesday. She was 19 when they met. "And he was so confident. Even though he didn't speak any Italian, he was a great communicator with his expressions. Everywhere we went, he would make friends."

Rosa was already engaged to someone in France, but Johnson was undeterred. Despite strong opposition from Rosa's father and competition from the Frenchman, he first won her heart and eventually gained her father's permission to wed.

As a husband, he was wonderful, said Rosa in her Italian accent, 60 years later.

"You know Italians are lovers," Rosa said. "David was very affectionate, very loving - not your typical Swede. He was very demonstrative and very loving his whole life."

The couple lived in Italy first, then moved to Cloquet for 11 months, then back to Italy for another four years. It took Rosa time to get used to the idea of Cloquet, which shocked her the first time she saw it. It wasn't anything like the Hollywood movies she'd seen.

"He noticed my anxiety and told me, 'I promise I'll bring you back if you don't like it,' and he did."

But they moved back to Cloquet four years later, Rosa said, because she really loved him and there were opportunities here for him.

Dave loved everything: Cloquet, Italy and Rosa. They built a life in Minnesota, traveling back to Italy nearly every summer. Rosa eventually opened her Silver Rose Fashions store in the grand old USG House across from Pinehurst Park, while Dave became a full-time property manager, as the owner of rental apartments and homes, ownership in the Lemon Tree, Alley Lounge and more over the years. They raised three children together - Debby, Vivi and Raffy - and Angel, Debby's daughter, who was more like a fourth child, Raffy said. There are two other beloved grandchildren as well: Carina and Allessandro.

Johnson was a community man as much as he was a businessman. He organized, solicited donations for and ran the free Community Christmas Dinner at Zion Lutheran Church for more than 25 years, feeding more than 500 people every Dec. 25.

"He did it, boots on the ground. He loved that church," Raffy said.

Raffy is now at the helm of the Christmas (and Thanksgiving) dinner along with his DAV comrades. "The next one will be the annual DAV Christmas meal, in memory of my dad," he said.

Johnson served on the Cloquet City Council for Ward 3 and ran for mayor once. He wasn't shy about telling today's councilors (and newspaper reporters) when he saw issues that needed to be addressed. He was a "doer," unafraid to take action or speak up, but also liked to help people. He was once found driving councilor Chris Swanson around, pointing out all the RVs and boats that were parked on streets illegally.

Rosa said his friends called him "the Google of Cloquet."

"If you needed to know someone and their family background, and the background of those family members, he remembered so much about the town and in such detail," Rosa said. 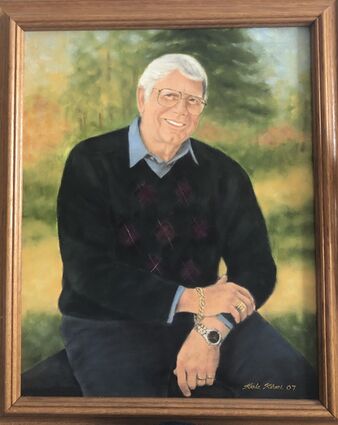 A friend painted this portrait of Dave.

Dave Johnson's obituary lists all the groups he belonged to and his involvement with the Boy Scouts, which was extensive. Much of the information for his past endeavors was part of a list Dave wrote up for Rosa before his heart surgery nine years ago.

"The crazy part about his history is how many things he did," Raffy said. "We found things that we didn't know about."

With family members spread over seven countries, there will be two services for Johnson: one this Sunday, and the other in May, for the inurnment at Zion Lutheran Church. Little known fact: Dave's father, Carl Johnson, donated the land along Washington Avenue for Zion when it outgrew its Carlton Avenue home decades ago.

"He was so good to the community and definitely a pillar of the family, with the kindest, most generous heart," Rosa said. "But his love for family in both countries was unreal."