In a boistrous battle, Carlton claims the jug 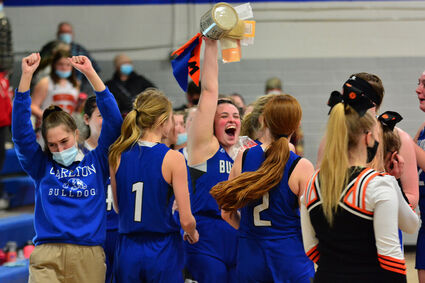 Haley Ableiter holds the Little Brown Jug trophy high for the Bulldogs as they celebrate their 52-47 win over the Wrens Monday night in Carlton.

The battle for the Brown Jug between the Carlton and Wrenshall girls basketball teams is always a fun night. The atmosphere is loud and raucous, and the intensity is always at a fever pitch. That's exactly the way things played out Monday when the Bulldogs pulled out a 52-47 win over the Wrens in Carlton.

"It really doesn't matter what the records for each team are, or whether they are having a good season or a season where they are struggling," said Carlton coach Brian Hey. "It's the game everyone gets excited for every year. It's a game everyone wants to win, and it is a great rivalry."

In the first game of the season the Bulldogs managed to escape with a two-point win in Wrenshall. Monday's game was tight as well. The Wrens were playing without head coach Emma Grover - who made an unexpected trip to the emergency room - leaving assistant coach Delaney Kittle in the driver's seat.

"Delaney stepped up and led our team like the true coach and leader that she is," Grover said Tuesday from her home.

The first half of Monday's game was relatively quiet, without much scoring, as each team struggled against the other's zone defense. The Bulldogs led 23-17 at the half.

"The crowd was really into it and that can be a little intimidating," Wrenshall's Kittle said after the game. "Our girls played hard and we had our chances, but it just didn't work out."

Coming out of the locker room down by six, the Wrens turned the tables quickly and built a lead of their own midway through the second half.

"Janae (Sjodin) hit some shots early in the second half and they started pressing us which caused us to turn the ball over off a couple of bad cases and the next thing you know we were down by six or eight points," Hey said. "I called a time out and we just tried to get things settled down and we just kept chipping away to get back into the game."

Wrenshall's Sjodin was a force on both ends of the floor, but on offense she was nearly unstoppable, scoring a game-high 27 points.

"As the second half continued, we handled the pace better and then we were able to finish the game at the free-throw line where we were 14 of 20," Hey said. "I was happy with how our girls were able to stop the bleeding and how they fought to get back in the game."

Rounding out the scoring for the Wrens were Liberty Bilges with eight points and Liz Johnson and Abbie Resberg with six each. 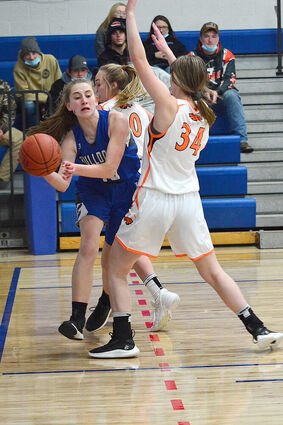 Carlton's Megan Matarelli gets blocked in the corner by Wrenshall's Abbie Resberg as the Bulldogs and the Wrens compete Monday night for the Little Brown Jug.

"The girls gave everything they had, and they worked hard in a tough environment on the road," Kittle said. "It's always tough to lose, especially when it's a game for the Brown Jug. It's the one game the team is so up for every year. I am just so proud of the effort they gave."

The win improved the Bulldogs record to 3-6, while the loss dropped the Wrens record to 1-7.

The Brown Jug game for the Carlton and Wrenshall boys basketball teams was tentatively rescheduled for Feb. 15 because of a Covid-19 case on the Bulldogs team. Carlton currently holds the jug.