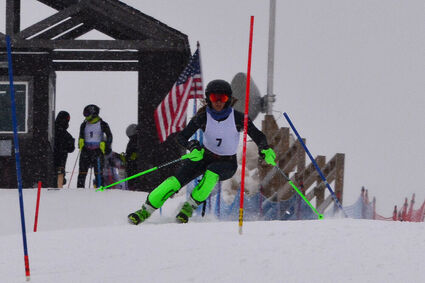 CEC's Emily Regas comes over the crest of the hill at Mont du Lac as she competes in Monday's Martin Luther King Alpine Race.

The Lumberjacks boys and girls alpine ski team has been busy this season, and the pace didn't slow down Monday when the Cloquet-Esko-Carlton competed in an eight-team meet at Mont du Lac Resort.

"Training has been good lately," said head coach Ryan Zimny. "It was a bit of a tough start with the warm weather in November and December, but Mont du Lac did a great job filling in the hill once it got cold enough."

On Monday, the girls team had three girls finish, with Emily Regas taking second, Madysen Waters finishing seventh and Teagan Tessier grabbing an eighth-place finish. The 'Jacks did not have the services of Nadia Tessier, another top skier who was out due to illness.

With the Tessier sisters - eighth-grader Nadia and seventh-grader Teagan - joining this year, along with newcomer ninth-grader Lauren Radovich, CEC added some real strength. Although they are new to the high school program, all have previous racing experience.

"We have four real strong girls skiers who have a legitimate shot at a state meet," Zimny said. "Emily has been up there all year, but Nadia is right behind her and so are Madysen and Teagen."

Regas had another strong finish last week when she took second at Spirit Mountain.

"We have a strong girls squad, and they could definitely be in the running to send some to state," Zimny said. "It's pretty hard to qualify as a team when there is only one class for alpine, and the section has some really large schools, but we should be in the mix if nobody falls.

The CEC girls team is young, with no juniors or seniors, so expectations are that the squad should be tough for the next couple of years. 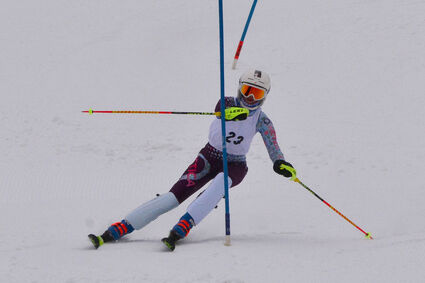 CEC's Madysen Waters leans into a turn to make a gate on a downhill run at Monday's alpine ski race at Mont du Lac.

On the boys side, the 'Jacks are led by Morgan Grove. On Monday, Grove finished in a team-high 33rd place while Carson Krouland and Aiden True finished 41st and 43rd, respectively.

"We haven't been able to field a full scoring squad for the boys at most of the races so far, but we've had some nice progression individually," Zimny said. "We lost both senior boys this year: Ethan Butcher to a broken arm before the season started, and Jack McWilliams, who is leading the Esko Robotics Team. The boys we have are enthusiastic and improving by the week. Morgan Grove is a great leader for our younger members on the team."

Zimny is always looking for new people to join the sport as he looks to increase numbers.

"I'm always looking for more kids to join," the head coach said. "It's a great sport and we have a ton of fun on the hill. Everyone is working to improve and are getting faster."