Hacking for fun and education 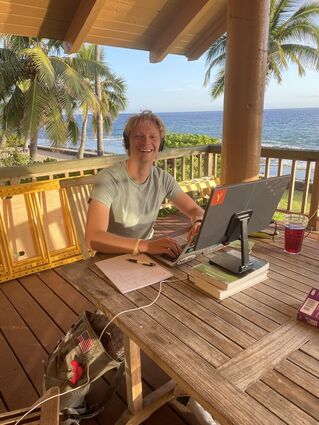 Luke Heine is inviting area high school kids to a virtual hackathon, where they can learn more about the amazing world of computer science. Because the April 9 event is online, kids can attend from home, their favorite coffee shop, or Hawaii, which is where Heine is pictured doing remote work last spring.

Cloquet graduate Luke Heine said he tried to teach himself computer science in high school, but it was overwhelming and there were few resources, aside from one good friend.

"I had Billy Bauer, he was phenomenal," Heine said. "He got me into it, but it just was way too hard."

He wants to give other kids from his hometown and region a leg up in the world of computer science, so he's calling a virtual "Northland Hackathon" for students who want to learn how to make their own apps, websites, and other technology.

One doesn't "have to want to become a web guru or app developer to come," the northlandhackathon.com website proclaims, "Just have a curiosity about the space and a willingness to explore and meet others along the way."

To "hack," the website explains, means to create something new and build a project. "It's the digital form of lego building and is meant to be as free form as you want to make it."

Heine said in pre-pandemic days "hackathons" might happen in a large room or warehouse and last all night long. "The people I know now who are into computer science usually have had a formative experience at one of these hackathons, where they basically meet a lot of other students who think computers are kind of interesting or just think apps are cool or cryptocurrencies, whatever."

Participants don't need to know everything, he stressed. They just need to be curious and open to a new experience. Once a person is registered, they will receive materials in advance so they can come in knowing a few common elements.

"This is a great opportunity to get some resources ahead of time, get your feet wet, and then come to the hackathon, build some tools, some people or explore something and then present together and kind of build a community around it," Heine said.

According to the website - which is chiefly written by Heine - the advance resources alone will help kids. "All these resources are free and what the pros use. You'll just get them years in advance. They're what we wished we had discovered sooner."

Heine said they're doing the hackathon remotely for two reasons:

1) who knows where the Covid infection rate will be, and

2) Instead of needing a ride to some far-flung spot, kids of all ages can tune in from home or a coffee shop or a friend's house.

"You can engineer and build stuff from anywhere in the world," Heine said. "This is kind of a way we hope to say 'Hey, like yeah, you can also do this from a place like northern Minnesota.'"

Heine is leading the charge, but they are looking for volunteer judges and other people in the community to take part. Several companies in Duluth and California have donated to cover the costs of the hackathon, so it's free. The Alworth Foundation has been helping to spread the word to schools and Heine is also working to spread the word on reservations as well.

While they are targeting high school students in northern Minnesoa, Heine said they won't turn interested applicants away because they're still in middle school, or enjoying a gap year after high school, or they live a little outside the region. There may be a cap on the number of participants though, so best to get a solid application in as early as possible.

"We're just gonna get them together that day and, you know, make something happen," Heine said. "But the idea of this is that it just isn't a one-day thing. It builds community where students know they have a place to go, if they want to explore this or make projects or start a company or whatever, they have a community they can turn to."