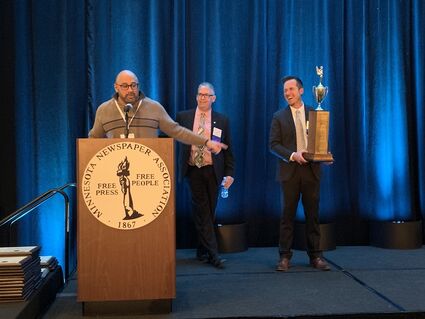 Pine Knot reporter and page designer Mike Creger speaks at the Minnesota Newspaper Association's awards ceremony last week after the newspaper won the Mills Trophy for the second year in a row as the state's "most outstanding weekly newspaper."

The Pine Knot News was once again named the "most outstanding weekly" in Minnesota at the annual Minnesota Newspaper Association convention last week. It is the second year in a row the paper received the distinction, which comes with the traveling Mills Trophy.

The win for the paper comes as circulation increases put it in a larger category of newspapers in the annual Better Newspaper Contest that MNA puts on. The Pine Knot won 23 awards for journalistic and advertising excellence, plus the trophy. Last year, it won 33 awards and the trophy. The year before, it was 15, the first year the paper was eligible to enter the contest. That's 73 awards in the three years and three months the newspaper has existed.

"We say it each year, and we mean it," Pine Knot editor Jana Peterson said this week. "We couldn't do any of this without support from our readers and advertisers. And what makes us unique, I firmly believe, is the strong contributions we get from the community, adding voices and images to our weekly work. We have a small staff, but really, it's a community effort."

Pine Knot staff member Mike Creger was at the scaled-down convention, the first in-person affair since the Covid-19 pandemic made last year's award ceremony a virtual one. He accepted the trophy on Thursday night. He said it was a surprise to repeat and all the more reason to celebrate "hyper-local" journalism.

"Newspapers still work," he told the convention audience in Brooklyn Park. "Our readers love us, and now we can show them the trophy again. So, thanks."

Peterson was home nursing a torn hamstring and other staffers, like many across the state, did not come to the convention as Covid-19 numbers remain high. Creger was deemed the most eligible to attend. Someone had to, because MNA requires the trophy to be at the award ceremony. It rode in Creger's car, bound for the Minneapolis suburb, strapped in the car seat.

"It was kind of bittersweet," he said. "It felt a little dirge-like giving up the hardware that we so enjoyed the past year."

A day later, the editor was relieved to know that "Millie" was coming back to the office and community. "I love it," Peterson said. "I'm going to sleep with a smile on my face. It really takes a village."

MNA and similar associations in neighboring states use a rotation system to judge the contest. Journalists from newspapers in Michigan reviewed 3,228 entries in a year's worth of work done from September of 2020 to September of 2021. There are about 285 newspapers in the state, with about 260 of those competing as weeklies like the Pine Knot. Daily papers compete among themselves, with the Rochester Post Bulletin winning the Vance Trophy as top-scoring daily in the state.

Here is a rundown of the awards the Pine Knot received on Jan. 27:

Competing against papers with similar circulations, the Pine Knot has won this award in all three contests it has entered. It takes into account all aspects of the newspaper: news, ads, opinion pages and even classifieds.

Judging comment: "Clean design, full page of news on 3, great coverage, local editorial in every issue, strong ads make this paper a winner. This paper would stand out even in a larger circulation category. Great job."

This category is judged on how a newspaper looks and the ease of reading it. The judge in the Pine Knot circulation class liked the Pine Knot's clean design and small touches to help readers navigate the pages. Page designer Mike Creger won a third place for "design portfolio" among all weeklies in the state. Judges look at several examples of design work from each entrant. Last year, Creger took top honors in the category.

Editor Jana Peterson won for her story on the Duluth K-9 dog that was mourned at a ceremony at the pet funeral home in Scanlon.

Judging comment: "Great quotes from a variety of sources and nice use of detail really set the scene for this clear, moving read."

This category recognizes work in news reporting that goes beyond the headlines. Pine Knot contributor Timothy Soden-Groves won for his behind-the-scenes reporting on those protesting the Enbridge Line 3 project.

Judging comment: "This is a topic that can be immensely polarizing, and this article does a wonderful job of presenting the passion the different sides feel about this project. ... the opening description definitely paints a vivid picture."

Mike Creger won his second first-place MNA award in this category, the first as a fairly new journalist "too many years ago to remember." The judge seemed particularly moved by his column in March of last year describing the past year navigating the Covid-19 pandemic.

Judging comment: "Mike Creger effectively offers a consensus of how many people have viewed the pandemic both from a personal perspective and the filter of being a journalist. 'I am tired. Drained. I've hit the wall,' he wrote."

Like Pine Knot contributors Pete Radosevich (first), Bret Baker (second), and Steve Korby (second) in past years, Ann Markusen was a winner in this category as well, receiving a second-place award.

Judging comment: "Nice mix of topics - from weighty subjects to closing down a productive garden as frost arrives. Her columns on child labor effectively combined personal perspective and stories with the broader topic and hopefully left readers more informed."

Dave Harwig won for his picture of horse racing at the Carlton County Fair. He is part of a strong group of freelance photographers who bring vivid images to our community. The paper took home a third-place award for its overall "use of photography" in the paper, the second time it has won an award in this category. In past years, photographers Amber Nichols, Dan Saletel and Matthew Moses have won awards as well.

Harwig won a second-place award among all non-daily papers for his portfolio of work, a prestigious prize.

Judging comment on Harwig's first-place feature photo: "Loved the action with horses straining, jockeys concentrating and clouds of dust in this image."

Jana Peterson won in this category for her story on TikTok rising star Emerson Rock, a student at Cloquet High School.

"Interesting insight into the power of social media that reaches every community."

This category celebrates ads that newspapers run promoting the paper. Mike Creger won a first in this category for creating an ad most readers of the Pine Knot are well aware of in the past year, the one of the Mills Trophy dominating the page and announcing the paper's first win as the "most outstanding weekly newspaper" in the state. The headline: Knot your average newspaper."

Each year, the contest announces a specific coverage topic, and for 2020-2021 it was, of course, the Covid-19 pandemic. A large part of the Pine Knot's success in the contest last year came from the first months of coverage of the pandemic. That continued into the past year and the paper won a second-place award among all non-daily newspapers in the state for its work. Pine Knot editor Jana Peterson is particularly proud of this award because the judge recognized the input from the community in the coverage.

Jana Peterson, Pete Radosevich and Mike Creger were honored with a second in the category, which is among every non-daily newspaper in the state. Judges receive up to 10 examples of editorials to review. The Pine Knot strives each week to offer a strong institutional voice with the editorial.

The Pine Knot has a lot of ground to cover with five high schools and plenty of other sports action to follow. This is a portion of the paper that is fueled primarily by freelance contributors, from writers such as Kerry Rodd to the aforementioned skilled photographers. 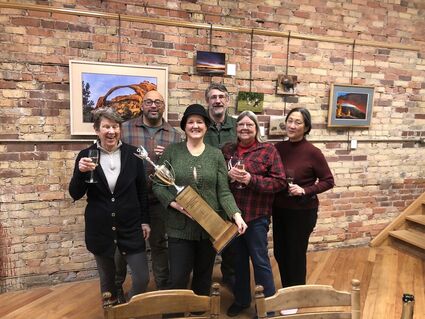 Ad designer Peggy Day won second for two ads. In the "best ad" category, it was work on the Bikes blessing ad for Journey Christian Church. In the "institutional ad" category, she won for an ad commemorating National Police Week.

The Pine Knot also won a second for its classified advertising section.

Jana Peterson won three third-place awards for stories in the "social issues," "business," and "breaking news" categories. The stories dealt with safe drinking water, the closing of a favorite service station and a deadly shooting.

Along with awards for its editorial pages, use of photography and design portfolio, the Pine Knot won a third-place award among all newspapers in the state in the "Lynn Smith Community Leadership" category. This honors papers that reach out with initiatives to make a difference in the community. The Pine Knot was awarded for the pine tree giveaway last spring: as a thank-you to readers for their continued support, the Pine Knot, along with partner Sappi, gave out 11,600 trees.