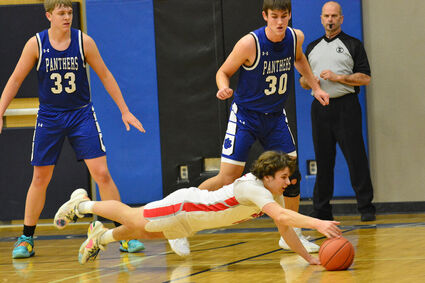 Moose Lake/Willow River's Chance Lunde dives after a loose ball as the Rebels defeated the Panthers Friday night in Culver.

Last Friday night's high school boys match up in Culver featured the tall-as-skyscrapers Panthers and the high-energy Rebels in a game that was tight throughout the first half. But Moose Lake/Willow River eventually hit the gas pedal to cruise to a 71-43 victory.

"We played solid defense and we were tied halfway through the first half and only allowed them to head into the locker room up by seven points," said South Ridge coach Phil Pliska. "They're a high-octane team that likes to play really fast. Our goal was to not play their game. Coming out of halftime, we closed their lead to two in the first 5-6 minutes. They took a timeout and it was like they flipped a switch when they came back out."

At halftime, the Rebels were up 26-19 and eventually led by only two. Then they went on a tear and started draining three-pointers at a rapid pace.

"Most of those threes came in the second half," said Rebels coach Wes Cummins. "When you face a front court like South Ridge's, you better hope that you shoot well. Their big guys do a great job protecting the rim."

The biggest problem facing the Rebels was trying to find a way to contain the Panthers front line that features 6-foot-10 Austin Josephson and 6-foot-9 Slayton Stroschein.

"We packed it in all night and if they were going to beat us, they were going to have to shoot jump shots," Cummins said. "Outside of Alex Watrin, we don't have a lot of size, so guys had to play a bit out of position. Chance Lunde, who is only about 6 feet tall, did a fantastic job shutting down Josephson for a long period of the game."

The Rebels were led on the offensive end by Logan Orvedahl, who finished with 19 points. 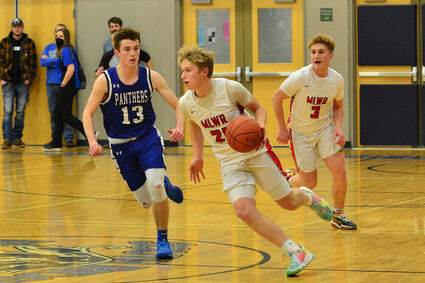 Luke Dewey pushes the ball against the Panthers' Zach Morse.

"We've been streaky all year," Cummins said. "When we make threes, they come in bunches. It was a relatively close game in the second half, but in a span of about three minutes we widened the lead to 20-points."

Leading South Ridge was Josephson with 14 points. Aaron Bennett was next with nine, then it was Ethan Nelson scoring eight points, Zach Morse and Stroschein each had four points while both Sheen Ralidak and Wyatt Olson chipped in with two.

The win improved the Rebels record to 11-4 and the loss dropped the Panthers to 7-5.