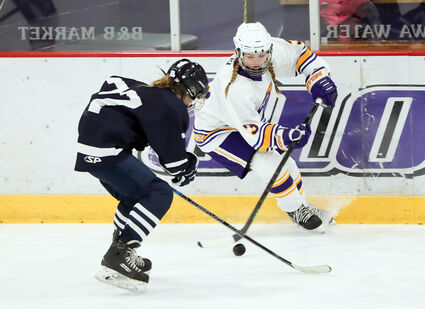 Senior Dana Jones jumpstarted the offense and the entire team played stellar defense as the Cloquet-Esko-Carlton girls hockey team picked up a 4-0 quarterfinal win in the Section 7A playoffs Tuesday night over North Shore.

After a scoreless first period, Jones scored on a shorthanded breakaway goal late in the second period to give the No. 3 seeded Lumberjacks a 1-0 lead over the No. 6 seeded Storm.

"Dana's goal was a huge momentum turner and you could almost feel the pressure lift off our team," said CEC coach Courtney Olin. "You have to give North Shore credit: they worked very hard and they kept it scoreless for a long time, which makes it a bit scary."

The second period ended with CEC leading 1-0 and a 36-8 shot advantage, but the Storm were just a shot away from tying the game.

It was a bit disconcerting for CEC.

"You just don't want a team that is young like that hanging around," said Olin. "Dana really got us going again in that third period and then we really settled in."

Just 28 seconds into the final period, Jones took a pass from Emma Parks and beat North Shore goalie Megan Larson high to the glove side for a 2-0 lead. A little over two minutes later, Jones completed the hat trick when she scored another breakaway goal to push the lead to 3-0.

CEC took two penalties through two periods and the Storm had not yet gone to the penalty box until Libby Althaus took a tripping penalty at the 13:28 mark. It didn't take long for the 'Jacks to score. Marina Dostal found a puck to the left of Larson and slid it to the point for Emily Litchke. Litchke took a slap shot that was tipped in front by Brynn Martin over Larson's shoulder for a power play goal that gave CEC a 4-0 lead. 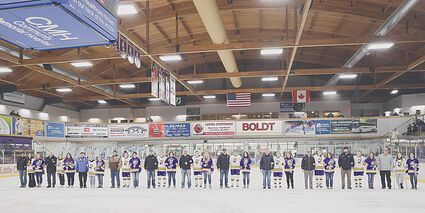 The Lumberjacks got another shutout from goalie Araya Kiminski. The junior picked up her ninth of the season.

"Even though Araya did not see a lot of shots, I thought she did have some quality stops on some breakdowns we had in our defensive end," Olin said. "We will need to avoid some of those issues if we want to beat Marshall."

When the Lumberjacks and the Hilltoppers met last on Jan. 4, Marshall defeated CEC 2-1.

"We are happy to win and move on to Saturday's game and to get another shot at Marshall," Olin said. "We'll need to stay out of the penalty box and we'll need to capitalize on our chances because they are a good hockey team."