Hilltoppers cut down 'Jacks in semifinal

Duluth Marshall proved to be too much for the Cloquet-Esko-Carlton girls hockey team Saturday as the Hilltoppers rolled to a 5-1 Section 7A semifinal victory to eliminate the Lumberjacks from the playoffs.

The two teams were in a scoreless deadlock through most of the first period until the 14:32 mark, when Marshall's Kendra Royer gave her team a 1-0 lead on the power play with just 2:28 remaining.

"Penalty kill has been a big strength of ours this season, so we were disappointed," Olin said. "Marshall did a nice job creating some chances low and capitalized on their opportunity."

The 'Jacks found themselves in deeper trouble in the second period when the Hilltoppers managed to pump in a pair of goals from Annika Lindgren and Ilsa Lindaman to go ahead 3-0. CEC's Tenley Stewart managed an even-strength goal with just seven seconds remaining in the period to cut the gap to 3-1. Emma Welch and Bella Harriman added assists on Stewart's goal.

"Tenley is a very versatile player and we moved her to forward knowing we needed to get on the scoreboard," Olin said of Stewart, who normally plays defense. "She helped to create a bit more offensive pressure and we were able to find the back of the net with her up there. She is a great example of the ultimate team player and is willing to do whatever it takes to help her team win."

Despite the late goal in the second period, the Lumberjacks were not able to gain third-period momentum as the Hilltoppers notched another just 2:12 into the period from Meredith Boettcher to go up 4-1. 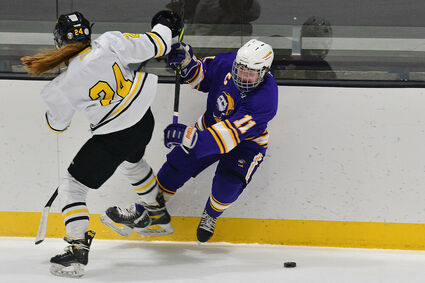 Cloquet's Bella Harriman gets knocked into the boards by Marshall's Merideth Boettcher as the Lumberjacks and the Hilltoppers compete for a section 7A playoff position Saturday in Virginia.

"We knew it would be difficult to come back on Marshall with the amount of skill they have, so we had to make a choice on how we would respond for the last 17 minutes of hockey," Olin said. "We were really proud of how our girls worked until the final buzzer. They never quit and battled until the end. At the end of the day, that's all we can ever ask of them."

Marshall added a late goal from Danica Mark for the 5-1 final.

CEC goalie Araya Kiminski finished with a total of 22 saves on 27 shots, while the 'Jacks were able to put 22 shots on Marshall goalie Rae Anderson.

"Even though the season didn't end the way we would have liked, we had a very successful season and got better as the year went on," Olin said. "Unfortunately, only two teams get to end on a win, so the majority of us feel the agony of defeat. I think in the first few moments after the loss, it stings, but in the big picture and after we have some time to reflect, we will look back and realize we got better as the season went on and had some unexpected success to feel very proud of."