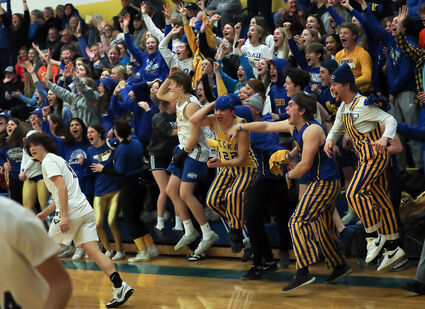 The Esko student section erupts when Keone Anderson hit a three-pointer late in the Eskomos' 95-68 win over Cloquet.

Esko's Koi Perich poured in a school-record 50 points on Tuesday night to complete a season sweep of the Lumberjacks as the Eskomos finished with an impressive 93-68 home win.

"Koi scored 45 in the last game against Hermantown and I had been joking with him that if he'd only hit more free throws, he would have scored 50," said Esko head coach Derek Anderson. "I didn't expect him to go out and get 50 the next game we played against a team that plays good defense."

Esko sprinted out to an early 16-6 lead, but the 'Jacks were able to fight back and tie the score midway through the first quarter before Perich took control and led his team to a 37-32 halftime edge.

"We went into a zone midway through the first half and that seemed to help us a little bit," said Cloquet coach Steve Battaglia. "Unfortunately we couldn't convert turnovers into points and then Koi got going and we didn't respond very well."

Perich, who had 24 points at halftime, was a thorn in the side of the Lumberjacks all evening despite Cloquet going to a 2-3 zone in an effort to control the talented sophomore.

"We just had no answer for Perich, he is an amazing athlete," Battaglia said. "He can get off the floor two or three times before other guys are even thinking of jumping. We thought we did a good job on Berger, but when another guy scores 50, that's not good."

It became apparent in the second half that Perich and his teammates were on a mission to put up big offensive numbers. The Lumberjacks struggled to slow down the Eskomos or keep up the blistering offensive pace Esko mounted in the second stanza.

"I think what makes Koi so special is his high motor, his speed, his quickness, his strength and his competitiveness," Anderson said. "He wants to go against the other team's best player and I've never had anyone play for me as competitive as him. He takes competitiveness to a whole new level."

Only one other Eskomo was in double-digit scoring and that was Dalton Spindler, who finished with 10 points. Meanwhile, Cloquet had balanced double-digit scoring that on a normal night would have looked better. Conner Barney and Caleb Hansen each recorded 18 points, Marco Mayorga scored 15 and Alec Turnbull added 11 points. Rounding out the scoring for Cloquet were Seth Rothamel and Joe Bailey with two points each.

Cloquet scored 36 second-half points, but were outscored in the second half by 21 points as the Eskomos put up 57 points after the break.

"We made a lot of adjustments on paper in the second half, but that didn't play out on the floor," said Battaglia. 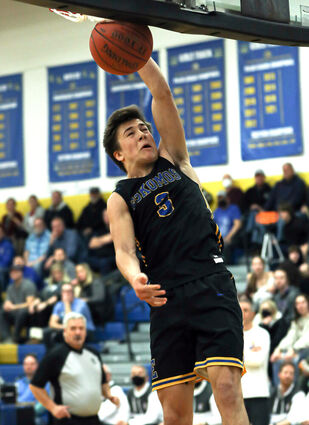 Esko's Makoi Perich dunks the basketball during Tuesday night's basketball game with Cloquet. Perich finished with a school-record 50 points in the game, a 95-68 Eskomos win over the Lumberjacks.

"We need to regroup. We've beaten teams that have beaten Esko, including Hermantown, so we know when we play at our best we can be tough, but we can't have the lapses defensively and we have to be better at taking care of the ball in big games."

Despite those adjustments Perich kept up his torrid pace and his teammates kept feeding him the ball. Also scoring for Esko were Brett Lillo and Cale Haugen with six points, Cuinn Berger with five. Nick Swanson and another player scored four each; both Connor Lahti and Keone Anderson recorded three points and Chad Hart had two.

"Cloquet is a very good defensive team and towards the end of the first half they gave us problems and were turning the ball over way too much," Anderson said. "I told the guys we needed to clean that up at halftime and then we had the big second half.

"I like the way we are playing and with Koi at a whole other level it is exciting," Anderson said.