Wrens dance a jig with the jug 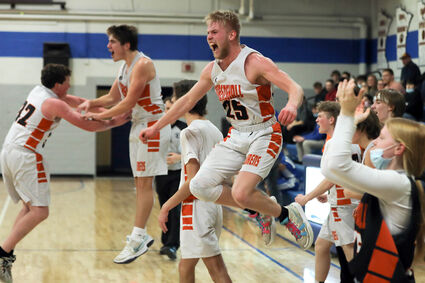 Austin Larva (25) and fellow Wrenshall players jump for joy after defeating Carlton Monday night and taking back the Brown Jug in Carlton. It was the first time since 2018 that the Wrens could take the jug home in the rivalry.

In the opening game of the boys basketball season, Carlton downed its next-door neighbors from Wrenshall. On Tuesday night, the teams met for a rematch in Carlton in the annual battle for the Brown Jug. This time it was the Wrens who came away with an impressive 85-68 win.

"Our guys were focused and ready to play," said Wrens coach Jon Bartczak. "It was a huge win for our guys, especially after losing that first game when we didn't have a lot of practice time on our own floor. We seem to make shots when we are on the road more than we do at home."

Things didn't come easy for the Wrens. The first half turned messy as they found themselves in foul trouble. Three Wrens had three fouls and the Bulldogs were into the bonus with just under seven minutes remaining in the half.

Despite the foul trouble, the Wrens rode the hot scoring touch of Austin Larva and A.J. Olesen, who had 15 and 14 points at the break. Larva was Mr. Inside and Olesen was Mr. Outside as he hit three 3-pointers.

"I wasn't worried about the foul trouble because our guys know how to play with fouls," Bartczak said. "We like to find out how physical we can be, but I wish we wouldn't have waited so long before we figured it out."

The Wrens led by 16 at halftime and stretched the lead to 21 points early in the second half. But the resilient Bulldogs were able to cut the gap to 12 midway through the second. Then Wrenshall regained the momentum while the Bulldogs started to find foul trouble themselves.

"In the first half we were able to get to the line effectively," said Carlton coach Shawn Filipiak. "However, we also missed seven free throws."

Larva led all scorers with 28 points and Olesen added 20 points. Luke Korpela had a big night for the Bulldogs with 27 points.

"Luke had a great game by starting off by hitting 3-pointers for us, but Wrenshall came out hot and moved the ball really well," Filipiak said. "Larva was able to get to the bucket and his size outweighed our youth and that hurt us." 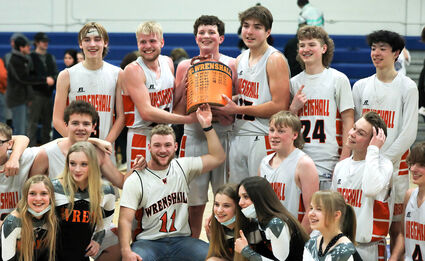 Wrens players and cheerleaders pose with the jug Monday after a resounding victory in Carlton.

Joining the Wrens scoring parade were Carter Woodall with 14 points, Cory Despot and Evan Wyman with nine points each and Peyton Johnson with five.

"This was just a nice win for us," Bartczak said. "Since that loss in the first game of the season, our team has developed a lot of maturity and they have realized the amount of work they have to put in. I think come playoff time we can be a dangerous team to play."

Since that first win, the Bulldogs have won only two games. With the loss to Wrenshall, they fell to 3-16. The Wrens went to 10-11 on the season.