The challenge? Searching for the best beer 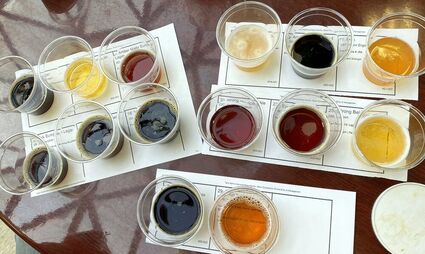 A beer sample is ready for the judges. Entries are judged blind, with just an entry number on the bottle so that judges don't know who brewed the beer. Photos by Tom Urbanski

File this one under "It's a tough job, but someone has to do it."

Last weekend, the Northern Ale Stars Homebrewers Guild hosted a competition in Duluth where 149 entries of beer, cider and mead were inspected with the purpose of selecting the best of the batch.

I was one of the judges.

It sounds like it might be all fun and games, but it's serious business once the judges are seated and the bottle caps are pried off.

And it's safe to say that judging beer is more complicated than one might expect.