Rebels fight, but fall, in playoffs 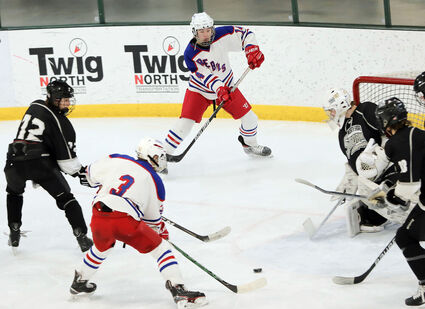 “Henry was incredible, especially in the first period,” said Rebels coach Lee Costley. “Henry and our defensive effort kept the score 1-0 after the first period despite facing an unbelievable number of shots.”

Despite Dammer’s dazzling defense, the No. 10 seeded Rebels fell 7-0 to the No. 7 seeded Broncos in International Falls and were eliminated from the playoffs.

“Quite honestly, Henry was spectacular in the first period and he has played well down the stretch at the end of the season and on Saturday,” Costley said.

After two periods, the Rebels were still in touch and trailed 3-0, but the undermanned Moose Lake Area team started to run out of gas in the third period and eventually gave up four more goals for the final of 7-0.

“We just ran out of juice,” Costley said. “Ironically we played a pretty good game, but every mistake we made ended up in our net.”

The Rebels finished the season with a 2-20-1 record while playing with fewer than 10 skaters much of the year.

“It was a challenge all year because we basically played with half a roster compared to other teams. Think of it this way — for every game my guys played, they were playing essentially another full game compared to the team on the other side of the ice,” Costley said. “We never had one single practice in which we had our full complement of players. Between sickness, injuries and other things, we just didn’t have enough bodies to overcome things.”

On Saturday, the Rebels played with 12 players, and backup goalie Richie Balut ended up skating out so the team would have more depth up front.

The Rebels will graduate two seniors including Dammer and three-year captain Henry Ribich.

“I couldn’t ask for two better seniors,” Costley said. “Dammer is a one-of-a-kind goaltender and a great kid. Ribich is perhaps the best captain I’ve ever had in 33 years of coaching. Those two will be successful in anything they do in the future.”