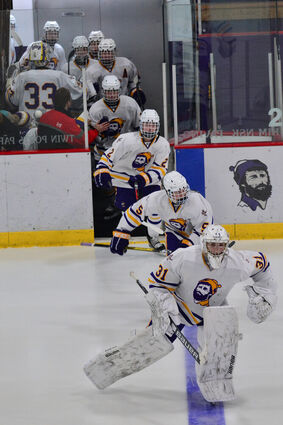 Cloquet goalie Kyle Abrahamson leads the Lumberjacks onto the ice for the start of a playoff matchup against the Marshall Hilltoppers. The Lumberjacks finished their season with a playoff win over Marshall and then a quarterfinal loss on the road to Andover.

Back on Nov. 4, the Cloquet-Esko-Carlton boys hockey team opened its season on the road against Andover. The Huskies took a 4-0 win in that game. Flash forward to last Wednesday when the two teams battled in Andover again in the Section 7AA quarterfinals and the Huskies again prevailed, this time by a score of 7-0 over the Lumberjacks.

"They have the ability to attack on the rush," said CEC coach Shea Walters.

After that first loss, the Lumberjacks struggled to find wins as they ended with a 7-16-2 regular season record. Meanwhile, the Huskies were going in the opposite direction. Andover has been ranked in the top five in Class AA all season and for a long stretch at mid-season they were ranked No. 1. By the time the Huskies played the 'Jacks they had reeled off 19 wins to go against just five losses and one tie.

CEC kept the game tight in the opening minutes, but a penalty at the 5:28 mark in the first period opened the door for a power play goal at 6:40 by Kyle Law with assists to Cooper Conway and Cayden Casey. Before the first period ended, the Huskies had gotten two more goals from Logan Gravink and Gavyn Thoreson to go up 3-0. Gravink's goal was assisted by Thoreson and Casey and Thoreson's goal was assisted by Conway and Casey. Through one period the 'Jacks had been outshot 13-3.

It was more of the same in the second period as Conway scored at 6:29 from Thoreson and Casey to make it 4-0. Casey scored at 8:38 with assists from Conway and Thoreson and then at 15:51, Conway scored his second of the game to push the lead to 6-0. Through two periods the Huskies outshot CEC 31-5.

"They would send all five guys at the net on zone entries," said Walters of the Huskies high-pressure offense. "Their entire team could skate very well."

Andover's lone goal of the third period was scored at 4:40 by Law, his second tally of the game, as the game was in running time throughout the final period.

Both Law and Conway had two goals apiece. Casey had a six-point game, while both Conway and Thoreson had five point nights.

"Thoreson is a great player that has good vision and strength," Walters said. "Casey was a good player for Elk River until this year."

"We just had a tough time sustaining any pressure and with our zone entries," Walters said.

The Lumberjacks finished with a final record of 8-17-2. They will lose five seniors to graduation, including a very talented pair of goalies.

"We will be losing Aaron Ermtinger who was just starting to play his best hockey, Wyatt Mrozik, and assistant captain Carter Salo who anchored our back end," Walters said. "We also lose two great senior goalies that will be hard to replace in captain Jacob Walsh and Kyle Abrahamson."

The win propelled Andover into a semifinal match against Forest Lake Saturday and the Huskies skated to a 10-2 win in that game. Grand Rapids and Andover will play for the 7AA title on Thursday at Amsoil Arena in Duluth at 7 p.m.