Esko gets after giants as playoffs loom 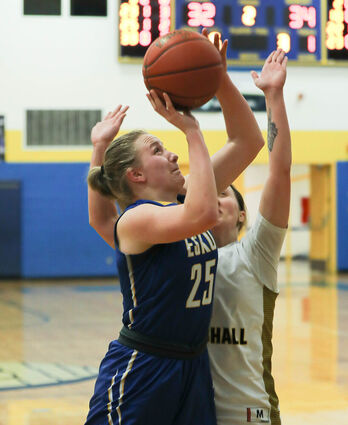 After suffering a loss to Pequot Lakes on Feb. 10, the Esko girls basketball team rallied to notch three consecutive wins over top opponents. On Feb. 17 they beat Hermantown by 31 points. Last Thursday and Saturday, the Eskomos beat Duluth Marshall and Grand Rapids, one of Class AAA's top ranked teams.

"I like the way we are playing right now," said Esko coach Scott Antonutti. "We aren't a tall team, but we are gritty and play tough and the girls don't quit."

In Thursday's 54-49 home win over Duluth Marshall, Esko took a 30-28 halftime lead, but were trying to stop the Hilltoppers' Regan Juenemann, who ended the night with a game-high 32 points.

"Juenemann was on fire in the first half," Antonutti said. "I assigned Jayden Karppinen to guard her and we told her to only worry about staying on Juenemann and not to worry about helping defense anywhere else. That's a change in philosophy, but she ended up doing a good job on her."

The Eskomos found themselves down 43-35 with 11:20 to play in the second half. With 7:30 remaining, Esko's defense clamped down after Marshall hit the 49-point mark.

"We held them scoreless over the final seven and a half minutes," Antonutti said. "Our defense tightened, our intensity picked up and it all starts with our guard play. Our guards never seem to get tired and I think it wears down other teams."

Karppinen, Aila Gabel and Avery Kuklinski, Antonutti said, are all tenacious and technically sound on both ends of the court.

"I think our guard play causes other teams to get fatigued as the games moves along," he said. "Particularly Kuklinski just never runs out of energy. She's our primary ball handler and runs the offense and this season has a 3-to-1 assists-to-turnover ratio, which any team would love."

After causing the Marshall offense to stall out for the remainder of the game, the Eskomos rallied for the win.

"We did a great job on Taryn Hamling with Kuklinski playing defense on her," Antonutti said. "Hamling averages 23 or 24 points per game and is going to play at North Dakota State after high school, so she is a good player, but we told Avery (Kuklinski) to just worry about sticking on her and not helping out on defense. It worked because Hamling only finished with 16 points."

At halftime the Eskomos led 31-22, riding the hot hand of sophomore Kyra Johnson, who led all scorers with 17 points.

"Both teams struggled to score in the beginning of the second half," Antonutti said. "They got to within 32-30 at one point, but we were able to get up on them 39-30 with a little run of our own and then we played great defense and also spread the floor."

Esko put the ball in the hands mainly of their guards to protect the lead and the scheme worked.

"Our guards are good about not turning over the ball and they all have good basketball sense," Antonutti said. "We wanted to burn some clock and it worked. We only scored three baskets in the second half, but because we took off so much time and played so well on defense, they couldn't cut into the lead."

Eventually Esko fought through to a 43-35 win.

"In the first half Kyra (Johnson) hit some shots early to help us get the lead," said Antonutti. "It was almost like two different games between the two halves."

In the second half the Eskomos managed just 12 points, while the Thunderhawks only scored 13.

"Honestly this is one of the top five wins I've had in my time coaching," Antonutti said. 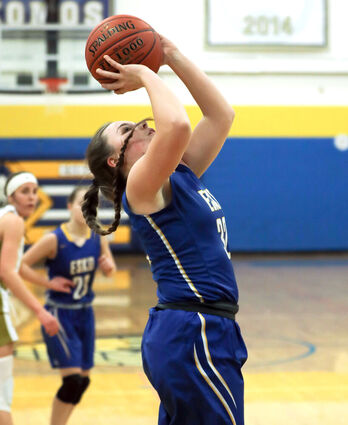 Karppinen added 14 points to join Johnson in double-figure scoring for Esko. Also scoring for the Eskomos were Gabel, with eight, and four points for Kuklinski.

The wins improved the Esko record to 18-7 on the season and over the weekend they received the No. 2 seed in Section 7AA. They were scheduled to open the sectional tournament at home against Hinckley-Finlayson Thursday night.

"I am not surprised about where we are at," Antonutti said.

Pequot Lakes received the top seed. Pierz is the No. 3 seed and Proctor No. 4 in the 17-team section. Moose Lake/Willow River is seeded No. 11 and was scheduled to play at No. 6 Crosby-Ironton Thursday night.