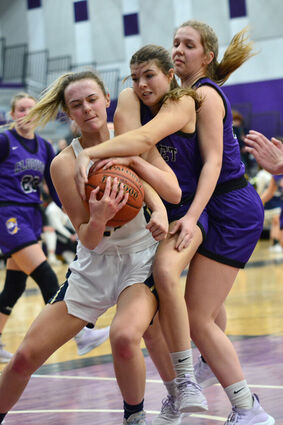 Cloquet's Alexa Snesrud and Ava Carlson tangle with Hermantown's Lauryn Biondi for a rebound during Friday night's Section 7AA semifinal game in Cloquet. The Lumberjacks got the win and were set to face Grand Rapids on Thursday for a chance to make it to the state tournament.

It has been quite a journey for the seniors on this year's Cloquet girls basketball team. Two years ago, the Lumberjacks won just three games. Last year they doubled that win total to six wins. On Friday night, the 'Jacks downed Hermantown 68-51 in the Section 7AAA semifinals to pick up their 20th win of the season.

"I am so proud of this group of girls and how they've stayed the course and worked so hard to get Cloquet basketball back on the map," said Cloquet coach Heather Young. "They have made all the bumps in the road worth it."

The 'Jacks struggled for the first few minutes while the Hawks came out hoping for revenge against a Cloquet team which had beaten them twice during the regular season.

"Give Hermantown credit, they came out hard and hit some shots early and we got off our game plan a little bit," Young said. "I think part of that might have been some postseason nerves, but to our girls' credit they got things figured out and started to regroup and we got back into it."

The Lumberjacks tightened up on defense and used a dominating inside game as they pulled out to a 40-27 halftime lead. Cloquet got six steals on the night by Alexa Snesrud, four from Kiley Issendorf, three from Maddie Young as well as numerous players with one or two steals.

"We just started taking it to the paint and relied on our inside game which in turn helps the outside game open up," Young said. "The nice thing about our offense is our girls are patient enough that sooner or later they are able to get some bunnies and eventually easy baskets. That first half Ava Carlson had some key put-back baskets and Alexa Snesrud had a big scoring night as well."

Snesrud led the 'Jacks with 21 points, Maddie Young had a solid night with 18 and Carlson finished with 14 points.

"Among the things I like about this team is we have more than just one or two players who can have a double-figure scoring night. We have some girls who can come off the bench on any given night and give us double-digit scoring, so that kind of depth is key to having a good season," Young said. "When we move the ball around and share the ball is when our offense is at its best."

The second half saw the Hawks try to claw back into the game, but the Lumberjacks were able to outscore them in the second 28-24 to claim a spot in Thursday's championship game.

Joining the scoring parade for Cloquet were Justice Paro and Caley Kruse with five points each, Katie Turner with three points and Kiley Issendorf with two.

The win allowed the Lumberjacks another shot at top-seed Grand Rapids in the section final Thursday night in Hermantown. Cloquet lost two regular season games to the Thunderhawks, 60-42 (Dec. 9) and 69-63 (Feb. 3.) 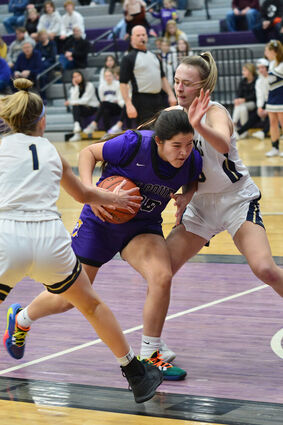 Cloquet's Justice Paro works through the Hermantown defense on a drive to the basket Friday.

"It will be a battle and we will need to take advantage of every scoring opportunity," Young said. "They are like us and have a lot of kids who can score, but the key to stopping them is limiting the touches of Taryn Hamling."

Hamling is one of the area's top scorers, but just a week ago the Eskomos, a team Cloquet beat twice this season, put the clamps down on Hamling, leading to an impressive 43-35 win over the Thunderhawks. The Esko win stopped their 13-game win streak.

"Esko kind of gave everyone a blueprint on how to stop Grand Rapids," Young said. "If everyone just does their job, we have a good shot at winning."