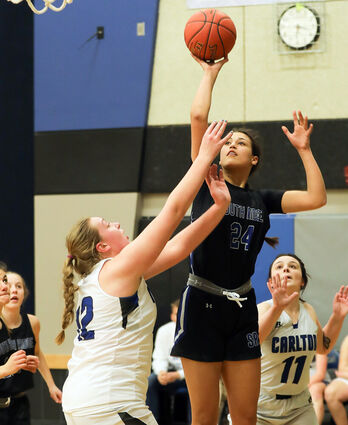 South Ridge's Kaitaia Klemetsen scores over Carlton's Addy Midge during Wednesday's Section 7A playoff game in Culver. South Ridge advanced, but lost to Ely in the next round.

The Section 7A girls basketball tournament ramped up last Wednesday as the second and third rounds of the tournaments commenced at various sites around the Northland.

After opening the tournament with a win over Fond du Lac, the No. 14 seeded Carlton Bulldogs took on No. 3 South Ridge. The Panthers prevailed 94-17.

"Their main three scorers can shoot and they were hitting everything," said Carlton coach Brian Hey. "They were 25-of-32 from the field and 11-of-14 from the three-point line.They just shot the lights out."

Carlton finished the season with a record of 6-19, while the Panthers moved on to play Ely, the No. 6 seed, Saturday in Duluth.

Against Ely, the Panthers led at halftime by 15 points only to allow the Timberwolves to come back and win a stunner, 69-63, to eliminate South Ridge.

"Our offense is a direct result of our defense getting steals and fast break baskets," said Brad Olesiak, head coach of the Panthers. "In the second half, we didn't get any turnovers and we struggled with our half-court offense, they out-rebounded us and they upped the ante in the second half and out hustled us."

Cromwell-Wright moved into the semifinals by knocking off Wrenshall 71-12 Thursday, then Floodwood 44-21 on Saturday. Sascha Korpela was the lone Cardinal player to score in double digits with 13 points against Floodwood. "We got up early and we took care of business," said Jeff Gronner, head coach of the Cards. "Floodwood plays a very deliberate style. They only play five players, so the game plan was to press them more than we usually do so they couldn't just hold the ball. We started a little slow, but we really had a strong middle of the first half and start to the second half and that was enough to get the win."

The win by the No. 2 seeded Cards put them into a Wednesday night matchup against Ely, after this issue of the Pine Knot News went to press.

The other semifinal on Wednesday features No. 1 seeded Mountain Iron-Buhl against No. 4 seed Chisholm. The final will be held on Friday at the University of Minnesota Duluth.