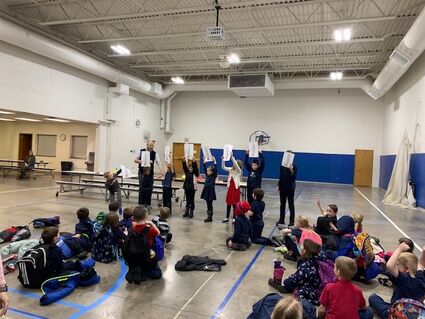 As part of the raffle drive at Queen of Peace Catholic School in Cloquet, top-selling families were recognized each week, and everyone who sold a ticket got a chance for a "dollar jump," where dollar bills are placed on the floor and selected students get to jump over them, keeping whatever bills they clear in the jump. The events were a chance to see how much money had been raised in the six-week drive, which netted the school nearly $20,000. First-graders were the top-selling class each week.

Students and staff at Queen of Peace Catholic School raised $19,665 in six weeks through its Catholic Schools Raffle this winter. Teachers, staff and the surrounding community of Cloquet united with students and their families beginning Jan. 14 when students started selling $5 raffle tickets, part of a fundraising program provided free of charge by sponsor Catholic United Financial since 2009.

Queen of Peace Catholic School is one of 86 schools in Minnesota and South Dakota that took part in 2022. School leadership set an ambitious fundraising goal and Catholic United Financial provided al...