Evan Gustafson and Joe Peterson each scored 18 points as Barnum topped Cromwell-Wright 57-39 to capture the 5A east subsection championship Tuesday night in Hinckley.

Gustafson, who hit three of Barnum's nine 3-pointers, helped Barnum to a 28-17 lead at half time, and Peterson paced the Bombers in the second half as Barnum rolled the 18-point victory.

"These kids had been together since kindergarten and have put a lot of time, work and effort into the program," said Bombers head coach Richard Newman. "I'm really proud of their dedication, their work ethic and the energy they bring every day."

In the victory, Barnum nailed eight of 12 free throws and forced Cromwell-Wright to try to use the long-range bombs to get back into the game. Noah Foster led the Cardinal with 18 points and added four 3-pointers in the loss.

"We worked hard in the defensive end tonight," Newman said, noting the Bombers held Cromwell-Wright's top scorer to zero points. "It was a good hard-fought game with both teams playing well."

Cardinals head coach Bill Pocernich was proud of the way his team played throughout the playoffs. "We overcame a lot in our first two playoff games and each time we had different guys step up for us," coach Pocernich said.

Barnum advanced to the subsection finals with two victories, after opening the 5A playoffs last Thursday with a 61-36 victory over St. John's Prep in Barnum. Joe Peterson nailed three long-range bombs and led all scorers with 21 points on the night.

With the win over St. John's Prep Thursday, the Bombers moved into the subsection semifinals and a matchup vs. Ogilive in Hinckley. Peterson again led the charge in that game, as he hit four 3-pointers and scored 26 points in the 60-50-win on Saturday. Hayden Charboneau connected on four 3-pointers as well and added 16 points in the 10-point victory.

Cromwell-Wright opened the 5A playoffs with a 9-point 52-43 win over McGregor at home Thursday night. It was the third time the Cardinals defeated McGregor this season. Dylan Nyberg and Foster paced the Cardinals with 12 points each in the second-round win, and Tanner Collman added 9 points for Cromwell-Wright. 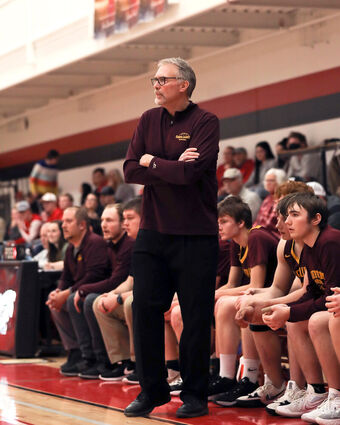 The win for the Cardinals set up a meeting between themselves and Braham Saturday afternoon in Hinckley. Again, it was Noah Foster's hot outside shooting and solid defense which led the Cardinals to a 60-53 win. Foster led a trio of Cardinals who finished in double digits in the victory. Foster closed the game with 26 points while Tanner Collman added 12, and Nathan Elliason scored 10 points, to get to the subsection championship and Section 5A semifinal.

The Bombers - who won the first two meetings this season with Cromwell-Wright - made it three in a row with the victory Tuesday night.

The Cardinals' season ended with an overall record of 14-13. The victory by the Bombers Tuesday night moved Barnum to a 21-8 overall record.

Barnum will now advance to the section 5A Finals vs. Nevis, who defeated Browerville Tuesday night with a 79-53 win in Wadena. The Bombers and the Tigers will tip off at 7 p.m. Friday with the location still undecided at presstime Wednesday evening. Nevis will enter the championship game with a 26-3 record on the year.