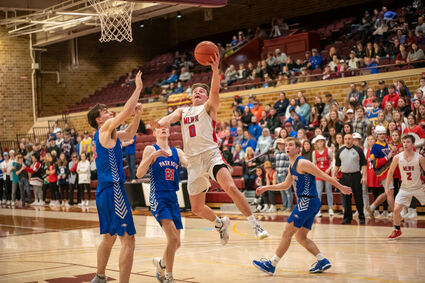 The Rebels Logan Orvedahl goes in for a layup against Pequot Lakes in the Section 7AA semifinal Tuesday. Moose Lake/Willow River lost 66-59 to the eventual section champions.

The No. 3 seeded Moose Lake/Willow River boys basketball team powered its way to a Section 7AA semifinal match up with Pequot Lakes by downing Virginia in the quarterfinals with a punishing and physical man-to-man defense. Against the Patriots Tuesday, the Rebels ran into foul trouble and were unable to overcome a slow start, losing 66-59 to the No. 2 seed.

The first half proved to be difficult offensively for the Rebels, who fell behind 25-19 at the break.

"Pequot is tall and athletic, and they contested shots both inside and outside," said Rebels coach Wes Cummins. "We had a hard time trying to find any advantage."

At one point the Patriots went up by 14 points midway through the second half, but the Rebels managed to chip away to get to within nine points. With 5:50 left, Rebels senior Phillip Sheetz was fouled at the 3-point line to make it 51-41 after making all three free throws.

After a miss at the free-throw line by the Patriots, the Rebels got a rebound putback basket by Alex Watrin to cut the lead to 51-43. Pequot Lakes then made a pair of free throws, but Logan Orvedahl drilled a corner three to make it 53-46. Moments later the Patriots turned the ball over and Sheetz nailed a long 3-pointer to make it 53-49, which gave the Rebels hope.

"We just started running more of our set offense," said Cummins. "Usually we can be a pretty freewheeling team on offense, but that wasn't working, so we had to change things up."

At that point the Patriots decided to go inside to 6-foot-7 Sam Rysavy, who made a pair of baskets to go ahead 57-49. Those two baskets proved to be too much for the Rebels to overcome.

The second-half comeback by the Rebels was led by Orvedahl, who finished with 20 points including a number of 3-pointers. Sam Dewey added 13.

"We needed someone to jumpstart the offense," said Cummins of Overdahl. "The 3-point shot makes a big difference and can close the gap in a hurry."

To get to the semifinals, the Rebels knocked off Virginia 80-42 on Saturday in a game played at UMD. Moose Lake/Willow River allowed only 16 first-half points to the Blue Devils, the No. 11 seed.

"There were no gimmicks on defense, our guys just played physical man-to-man defense and gave a lot of effort," Cummins said. "We had a pretty good game plan for what they wanted to do offensively, so they didn't get a ton of great looks off their normal actions. That, coupled with a bit of cool shooting, led to a great first half for us."

On the flip side, the Blue Devils held two of the Rebels top scorers to a total of 5 points, as Logan Orvedahl scored just 2 points and Phillip Sheetz had just 3 points.

"Credit to Virginia for taking those two guys out of the game," said Cummins. "However, when you pay that close attention to specific players, you leave openings for others."

Those others included Alex Watrin, who scored a game-high 37 points. Duane Broughton crashes in to contest a Pequot Lakes shot Tuesday in Duluth.

"I think the fact that we still scored 80 is credit to the balance that is developing on our team," Cummins said. "We've been waiting all year for Alex to dominate. He's had the physical skill set from Day 1. He was buried a bit last year on the depth chart and didn't play much. We knew once he got some confidence, he would turn into a monster."

Nearly all of Watrin's shots came within a couple of feet of the basket as the Rebels guards continually did a great job of getting by defenders and then dumping it off to Watrin.

Both Sam Dewey and Duane Broughton also were in double-digit scoring with 10 points each.

The loss to Pequot Lakes brings to a close the final season for eight seniors on the Rebels roster who have been key players in an impressive run of victories. Graduating this season are Orvedahl, Sheetz, Sam Dewey, Broughton, Watrin, Lunde, Mizh Miller and Cade Durkin.

The Rebels wrap up the season with a 19-9 record.