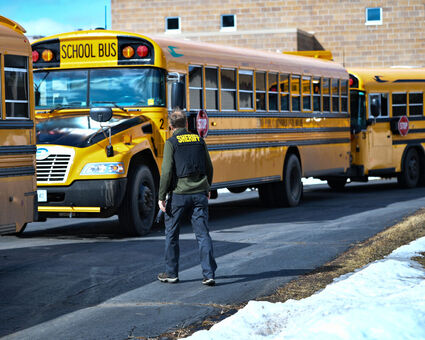 After a bomb threat for Esko schools was called in Thursday, students were evacuated for more than two hours until it was time to go home. Buses and parents picked up students at the evacuation site. The school didn't open for students or staff until after 4 p.m., more than three hours after the 911 call came in.

Two schools in Esko and Cloquet were impacted by threats last week, but they weren't the only ones faced with frightening messages on St. Patrick's Day.

Law enforcement responded to an anonymous 911 call at 12:49 p.m. Thursday indicating that an explosive device was seen in an Esko High School classroom. Students and staff were evacuated to a nearby safe spot and the entire school was closed down for several hours as the building and grounds were searched extensively.

An online search of bomb threats on March 17, 2022, revealed that schools across the country - including Detroit Lakes and Esko in Minnesota, several districts in Wisconsin and Louisiana and at least one high school in California - all received bomb threats on Thursday.

The Two Rivers police department in Wisconsin issued a press release the same day, noting that multiple bomb threat calls were made to schools throughout the state. "It is believed these 'swatting' type incidents are being made by parties from overseas," the press release stated.

Lt. Dan Danielson of the Carlton County Sheriff's Office told the Pine Knot Monday there were many similarities between the Detroit Lakes and Esko bomb threats. "I'm working to see if our threat had any other ties to threats around the Midwest," he said.

Locally, the response to the Esko threat was immediate and substantial. According to witnesses, approximately 20 squad cars and other emergency vehicles responded to the school campus in the heart of Esko. Officers from Cloquet, Fond du Lac, Duluth, St. Louis County and the Minnesota State Patrol assisted Carlton County, along with the DNR enforcement division, Esko Fire Department and Cloquet Area Fire District. Officers blocked off access to the school, setting up a perimeter about a block away from the school. They also went door-to-door to businesses near the school, letting those inside know there had been a bomb threat nearby.

Danielson said the bomb squad from the Crow Wing County Sheriff's Office was standing by.

"Thankfully, we were able to steal the assistance of Duluth PD's bomb dog, who we utilized for the search of the campus," Danielson said. "So, Crow Wing did not have to respond in-person, as we did not find a device that was suspicious."

Esko students were released at the end of the school day from the evacuation site and either bused home or were picked up by parents. Students and staff weren't allowed to return to the school buildings until sometime after 4 p.m.

The bomb threat came one day after two Cloquet Middle School staff members received emails Wednesday indicating the school was targeted for a possible school shooting the next day.

Cloquet superintendent Michael Cary said the Cloquet threat came through a specific student's account, but he said that doesn't necessarily mean the student sent it.

The school district contacted law enforcement on Wednesday out of safety concerns and also because making threats of violence toward a school is a crime.

In a press release, Cloquet police commander Adam Reed said CPD immediately began investigating and attempting to locate the source of threat. As of Friday, "multiple people" had been interviewed, but no arrests had been made.

Cloquet police chief Derek Randall said they believe an unknown person accessed a school messaging account of another student to send the threat. "We're currently working to determine the message's source with an internet provider," he said.

Although the police determined it wasn't a credible threat and school continued as normal on Thursday, members of the Cloquet Police Department and Carlton County Sheriff's Office had an increased presence at all Cloquet Schools. The district emailed parents Thursday morning to communicate there had been a threat, which was determined to be not credible.

Cary said they escalated the police presence in and around the middle school "out of an abundance of caution," just like they did earlier this school year when there was a nationwide TikTok encouraging kids to commit violence at their school.

Cary didn't know about Thursday's attendance numbers, but he estimated on the day of the TikTok threats, only about 50 percent of students came to school.

"These things (threats) are very disruptive to learning," Cary said.

Randall said threats to a school aren't a one-size-fits-all scenario. 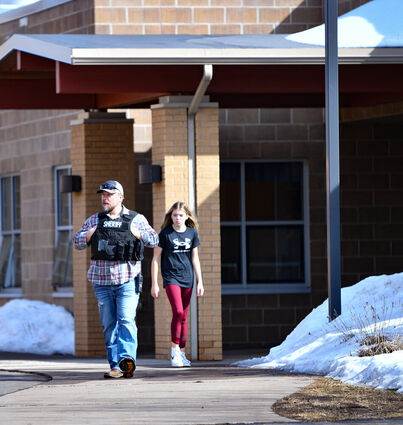 An Esko student is escorted by law enforcement from the evacuation site to a parent pickup Thursday.

In some of these situations, people in these situations are acting out, suffering from mental health crises, or in need of help for underlying issues, he said. Support is available in various ways for those individuals, including calling 911, contacting the school counselor, calling the Minnesota Crisis line by dialing **CRISIS (**274747), or the Crisis Text line by texting 741741, or by contacting the local county public health office.

"In other cases, these incidents can come from hacker groups, foreign countries, or other nefarious online perpetrators looking to cause fear and disrupt the peace," Randall said. "We do our best to determine who and what we're dealing with as we uncover information and deal with it appropriately."

If anyone has any information, they're asked to contact law enforcement by calling 911 or Cloquet police at 218-879-1247.