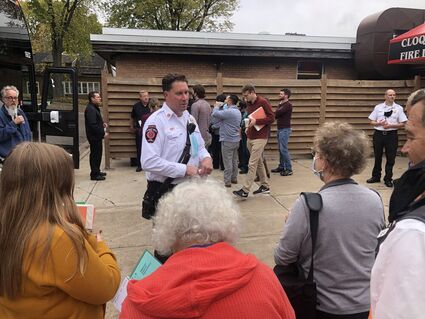 The Cloquet Area Fire District has a new fire chief, but he's no stranger.

Buhs has been interim chief since former fire chief Matt Ashmore resigned in December, a move that came after the former chief was placed on paid administrative leave Nov. 11. It had taken the board two national searches and a revision of the job requirements to land on Ashmore, who lasted only a year with the district.

Board chair Linda Way said Buhs had let the human resources committee know he was interested in the position on a permanent basis this month. She spoke highly of his leadership and communication skills on behalf of the HR committee.

"First and foremost he advocates on the staff's behalf and for the needs of the district," Way said. "He acknowledges those he works with for their efforts. He holds himself and others accountable."

She also said Buhs does not accept the status quo. "He's looking at new ways of doing things," she said.

Board member Jason Paulson advocated that the board at least post the position internally. He spoke highly of Buhs but worried about the process. Most of the board members disagreed.

"I think Jesse has stepped up to the plate," said Gary Harms. "He certainly qualifies, he meets the criteria for being chief and I would support going forward as our next chief."

Sheila Lamb added that staff morale has improved. "We need the consistency," she said. "We've had upheaval and too much turnover."

Way said the CAFD attorney said in January that the board could appoint and promote to fire chief, versus posting the position as it has in the past.

In an interview this week, Buhs admitted the job came with many challenges, but things are getting better.

Not only was he thrust into the top spot at the fire district on short notice and an interim basis, but Ashmore's suspension and then resignation came at roughly the same time the district's administrative director resigned to take another job, as did the public education officer. It was also right in the middle of a tumultuous budget and levy process that garnered more attention - largely from unhappy Thomson Township residents - than the district had received from taxpayers since its inception.

"I'm learning the role, trying to hire new firefighters and working diligently to navigate the concerns about the ambulance primary service area (PSA) that were brought up," Buhs said.

At the same time, he's also going to be working with a new consulting firm to get a much more accurate idea of how CAFD costs for ambulance and fire services break down, and continuing with improving facilities and the staffing and delivery model for CAFD, which provides fire protection to 170 square miles and ambulance service to a state-mandated area of more than 250 square miles in Carlton County and southern St. Louis County.

Things will improve once they hire a new administrative director to help with the day-to-day management of the district. Buhs explained the role, a "catch-all" position dealing with everything from human resources to budgeting, recruitment and retention, and more. "It's basically the things that a city government would typically handle for a fire department," Buhs said.

That's part of the challenge: the unique nature of a fire district that deals with multiple municipalities and has levy authority but doesn't have the administrative structure of a city.

But the new chief gets that. He was a firefighter when the city transitioned from its own fire department to the first fire district in the state of Minnesota in 2009. He started with the city of Cloquet in 1998, and will mark 24 years of firefighting and ambulance service here in June. In the years since then, he worked his way up to captain in 2009, then battalion chief in 2013. He stepped into a daytime administrative role in November, and got the interim title in December.

He's married to Sarah Buhs, the former public education director who is now the director of United Way of Carlton County, and the couple have two children.

Buhs said Cloquet has been a great place to spend his career and raise a family.

"Obviously, I plan to finish my career here," he said.