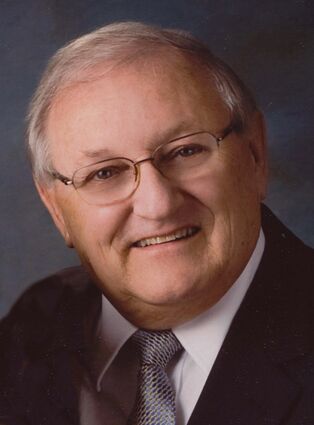 After graduating from Duluth East High School in 1952, John attended the University of Minnesota Duluth, graduating with a degree in business. He met the love of his life, Joan Hallback, at UMD; they married on June 28, 1958, and raised their family in Duluth.

John spent his professional career at the Northwest Paper Company/Potlatch Corporation in Cloquet. He served the company in several roles, retiring as vice president of marketing. He also served in the Minnesota Air National Guard in Duluth for 18 years, where he rose to the rank of captain.

A lifetime member of Pilgrim Congregational Church, John enjoyed singing in the choir and served as treasurer for more than 20 years, trustee, and chair of the diaconate. He was very active for many years as a member and leader in the Duluth Masonic Temple, Duluth Scottish Rite (where he participated in fundraising for the Masonic Children’s Clinic for Communication Disorders), Viking Shrine Club of Cloquet, and the Kiwanis. After retirement, John volunteered with a group of his friends at the Damiano Center soup kitchen for several years as well as for SCORE, the Service Corp of Retired Executives.

Most important to John was his family. Whether at the cabin on Eagle Lake, on vacations or celebrating holidays, he created wonderful experiences and memories that Joan, his children, and grandchildren will always cherish.

Visitation: 10 a.m. until the 11 a.m. memorial service Saturday, April 2, at Pilgrim Congregational Church, 2310 E. Fourth St. in Duluth. The service will be livestreamed at http://www.pilgrimduluth.org. A luncheon will follow in the church social hall. Inurnment will be in the spring at St. Matthews Cemetery in Esko. In lieu of flowers, please consider donating in

memory of John to the Pilgrim Congregational Church music fund or the Minnesota Masonic Children’s Clinic for Communication Disorders. To leave an online condolence, visit http://www.nelsonfuneralcare.net.