Helping through the grief wall 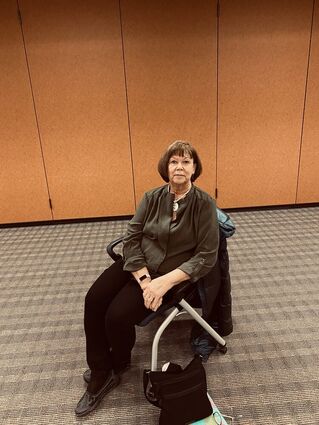 Peggy Maki facilitates the grief support group at Community Memorial Hospital in Cloquet. She said it helps to have someone with expertise in grief and walking people through the grieving process, something she's done at CMH, Liberalis and the Mash-Ka-Wisen treatment center.

When Jessica Lee's boyfriend of 11 years died unexpectedly in 2014, she felt absolutely lost and alone. She had never experienced such a traumatic loss, and the person she loved the most could no longer help her laugh about life and get through the pain. She called it "astronomical" grief.

"When Jimmy died, I thought my life died with him," Lee said. "It was so unexpected, like a light switch going off."

Then she discovered the grief support group at Community Memorial Hospital in Cloquet. Lee went to her first meeting exactly three months after he died.

"Obviously, you never get over it, but talking and being open about it is really helpful," Lee said. "It also helps you understand and deal with it better."

Grief counselor Peggy Maki helps shepherd and advise the meeting, but the people who attend also help each other. Some may come for a few weeks and never return, others may come for years, enjoying the give and take of the support they find there.

"There is no way around grief," Maki said. "You really have to go through it."

Many come between two and four months before they begin to feel relief from the intense emotions of grief, Maki said.

"People experience a variety of emotions after loss - sadness, yearning, anger, regret - they may be overwhelmed and not know if how they're feeling is normal," Maki said, adding that people often vacillate back and forth between different emotions or even experience multiple emotions simultaneously when grieving. "To come to the group and get support from myself and others can be very helpful."

The group meets 7-8:30 p.m. the second and fourth Tuesdays of the month in the Pine Room at CMH. The next meeting is April 12.

Bottling up grief can lead to physical ailments as well as poor mental health, Maki said. She can usually tell when someone is stuck in denial. It helps to have someone with expertise in grief and walking people through the grieving process, something she's done at CMH, Liberalis and the Mash-Ka-Wisen treatment center.

Maki started the grief support group at CMH in 2007. She retired in 2016 and another facilitator took over, but now she's back. Attendance took a hit during the Covid-19 pandemic, and now there's an attempt to rebuild the group and let people know they don't have to drive to Duluth for grief support: it's available in Cloquet, at no cost, and all are welcome.

Lee said attendees usually sit in a circle and take turns talking, but people don't have to talk if they don't want to. Just listening is fine too. People don't share things they hear at group meetings outside of the group. She describes Maki as the "orchestrator" and said Maki will sometimes bring up topics to get a discussion going.

Lee said learning about the grieving process is helping her cope. Now she enjoys helping others who come while still benefiting herself. "Some people might be nervous or afraid of being judged," she said. "We're pretty open and understanding."

"They give each other support, and it's a beautiful thing to see," Maki said. Jessica Lee and her boyfriend in happier times. Lee said the group helps her get through after his death in 2014. She still attends most meetings, to help others and herself, she said.

The death of someone close is not a requirement to attend, Maki said. A person could be grieving a divorce, the loss of a pet or a friend. The loss of normalcy, caused by the pandemic. They might be lonely. No matter the cause, they are welcome.

"I tell people: Grief tore our world down by the yard - we rebuild one millimeter at a time. It is long, it is slow. We may always walk with a limp, but we will walk again."

Attending meetings isn't a cure, but part of a process for dealing with loss. "Some people think they will never get over it, but it gives them hope," Maki said.

A local grief support group meets 7-8:30 p.m. the second and fourth Tuesdays of each month in the Pine Room at CMH. Take the elevator to the ground floor and follow the signs. People are welcome to just show up or, to find out more, to contact Peggy Maki at 218-348-0435 or [email protected]