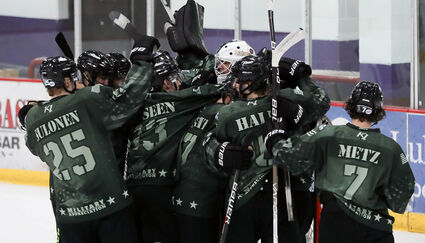 Just a few months ago the Minnesota Wilderness were in fifth place in the North American Hockey League Midwest Division. Only the top four teams in each division make the playoffs, and the team was struggling with injuries and keeping the puck out of the net.

"We were hurting at the time," said Wilderness head coach Dave Boitz. "We had a nine-game losing streak, a lot of bad luck, key injuries and we struggled to stop the puck. All of that made for a bad situation for us."

Boitz, who also acts as the team's general manager, made a trade for goalie Matt Smith in January. The team got healthy and suddenly the Wilderness went on a tear. Since the turn of the new year, the Wilderness are one of the league's hottest teams with a record of 18-5-1. During that span they went on a nine-game road trip that would have had most teams cringing. Instead, the Wilderness embraced it and kept winning, including six wins in Alaska that vaulted them into third place in the division.

"Smith has been brilliant in the nets for us and we got healthy up front," Boitz said. "We are getting unbelievable play from our defensemen and our scoring balance has been phenomenal so we are not just counting on a couple of guys to score."

Since his arrival in Cloquet, Smith has a 10-1-1 record in his 12 games between the pipes. Prior to his arrival he was playing for the Granite City Lumberjacks, a Tier III junior hockey team one level below the NAHL. He was 10-0 with the Lumberjacks, and in September played one game for the Springfield Jr. Blues, then the first-place team in the NAHL Midwest Division, which he also won.

Not only are the Wilderness solid with Smith anchoring the nets, but they also currently feature five players who have committed to Division I colleges, and Boitz feels that by the end of the year there will be a whole lot more commitments by his players.

"I would not be surprised if our entire defensive corps would get (college Division I) offers by the end of the season," Boitz said. "We have two guys back on the blue line who have set team records for offensive production this season, so we like our depth back there."

Cole Crusberg-Roseen has set the team record for goals in a season with 19 and Max Ruoho has also set the assist record for a single season with 40 assists. 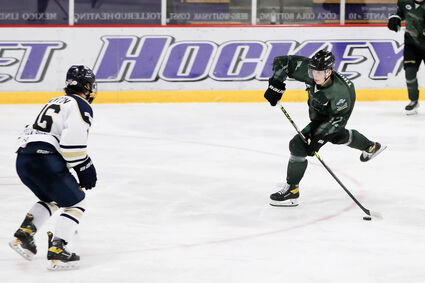 Minnesota Wilderness' Gunnar Thoreson shoots the puck for a goal during Friday night's game with Janesville. The Wilderness wore, and auctioned off, special Military Appreciation Weekend jerseys for the series at Northwoods Arena.

Last weekend the Wilderness split a pair of games against the Janesville Jets, losing in an overtime shootout on Friday and then winning a 4-0 shutout on Saturday against the team that is now in fifth place in the division. In Saturday's win the Wilderness broke open a scoreless tie by notching a pair of goals in the second period. Haden Kruse scored his seventh of the season on the power play and then it was Sam Antenucci picking up a shorthanded goal to make it 2-0.

Konrad Kausch got the nod in the nets and notched the shutout with 22 saves on 22 shots. It was Kausch's second shutout and eighth victory of the season.

The win on Saturday improved the Wilderness record to 31-21-1, good for 64 points in league play.

"We have six games left and anything can happen," Boitz said. "It is still a fight just to get in the playoffs, but if we can keep healthy and doing what we've been doing, I like our chances. This team never got down even when we were in the middle of that nine-game losing streak."

The Wilderness host Springfield in a two-game home series scheduled for 7:15 p.m. Thursday and Friday at Northwoods Credit Union Arena.