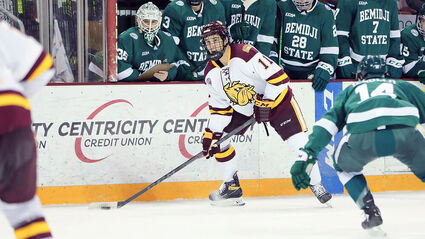 At UMD, Cloquet grad Kobe Bender fought for ice time his freshman and sophomore campaigns as the Dogs won back-to-back national championships. Bender blossomed in his final two seasons and the end result was a pro contract.

On Tuesday, Cloquet graduate Koby Bender finally reached the end of a long hockey road when he signed a professional contract with the Bridgeport Islanders of the American Hockey League after wrapping up his career at the University of Minnesota Duluth.

Bender's life since high school hockey has been anything but easy. He played his senior year of high school with the hometown Minnesota Wilderness in the NAHL, followed by a year with Muskegon of the USHL before joining the Bulldogs. At UMD Bender fought for ice time his freshman and sophomore campaigns as the Dogs won back-to-back national championships. Bender blossomed in his final two seasons and the end result was a pro contract.

"Those first couple of years were really tough at UMD, but I think they made me the player I am today," Bender said. "I didn't get a ton of ice time, but it allowed me to watch and learn and start developing and then be ready when I finally got my chance."

Bender finished with 26 points and provided the team with a gritty, hard-grinding forward who led by example on and off the ice. Now he will take those talents to the highest level of professional hockey other than the NHL.

"There were several professional teams that had contacted my advisor, but the Islanders organization is the best fit I think for me," Bender said. "I am excited about going out there and getting to work."

Bender left Minnesota on Monday and is headed for Connecticut where he will meet with team officials.

"I would be lying if I said I wasn't a little nervous," Bender said with a laugh. "I am just really excited to get my chance."

Bender is the son of Brenda Gigliotti and Tony Bender. His sister Kiana is the starting shortstop for the UMD softball team.