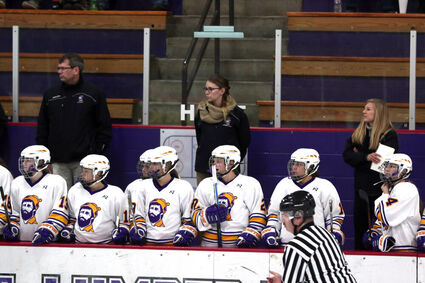 Dave Esse, back left, has been assistant coach to his daughter, head coach Courtney (Esse) Olin, for the Lumberjacks girls hockey team for the past five years. Olin announced she will stop coaching to go back to school, while Esse was inducted to the Minnesota Hockey Coaches Association Hall of Fame last Thursday.

It's been quite a week for Courtney Olin and her father, Dave Esse.

After seven years as head coach for the Cloquet-Esko-Carlton girls hockey team, Olin went public with a decision to leave the coaching ranks to pursue a doctorate of education degree the very same week her father was inducted into a hall of fame.

Dave Esse was surprised to learn he was named to the Minnesota Hockey Coaches Association Hall of Fame last Thursday. Esse was the CEC boys hockey coach for 18 years, and coached as an assistant to his daughter for the last five.

"I didn't know anything about it, and I had been to the last 18 coaches' banquets," Esse said. "I was out working at my cabin and I got a call from my good friend Mike Taylor from Eagan, and he said, 'Welcome to the Hall.' I had no clue what he meant. I thought he was up in Duluth."

"While I was coaching the boys, Kyle Young was with me since Day 1," Esse said. "He is a great coach that was very dedicated and loyal and I couldn't have coached without him and many others. I'm very thankful to all of the coaches and players that I have had the privilege to work with the past 31 years."

Prior to his coaching career Esse was an All-American hockey player at the University of Wisconsin-Superior, where he was also a four-year captain of the Yellowjackets.

Currently, Esse works as the District 11 coach-in-chief for USA Hockey as well as teaching physical education and health full-time at Cloquet High School.

"It was a tough decision," said Olin of resigning as head coach. "I was accepted into the doctorate of education program at Concordia-St. Paul and I plan to pursue that degree along with an administrative license."

Due to her internship, as well as raising a family, Olin needed to make some decisions, and one of those was to resign as coach of the team she grew up playing for under one of the state's best girls coaches, Dick Bartholdi.

"I consider it an honor and a privilege to be part of the high school program I played for," said Olin. "I was fortunate over my seven years to have great athletes and community support."

The highlight of her time at Cloquet was the 'Jacks making it all the way to the state championship game in the 2019-2020 season, finishing as runners-up in the Class A state tournament.

"I think when you are in the moment you don't appreciate it as much as you do when you get a chance to look back," said Olin. "That was a great team, but more importantly, they had great team chemistry and camaraderie. It was a year I will never forget."