Back on a varsity field, Cards get a historic win 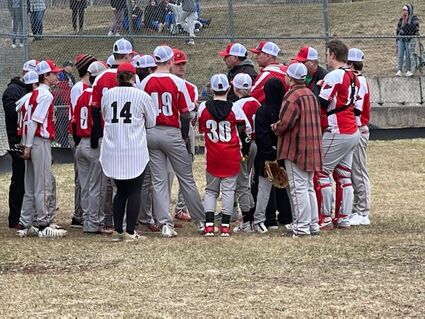 Cromwell-Wright coach Dean Levinski and players celebrate the first Cardinals varsity win in 12 years as they huddled up after the game against Carlton Tuesday.

Cromwell-Wright had to wait 12 years between varsity baseball wins, but that's in the past, after the Cardinals defeated Carlton 3-1 on the road Tuesday, April 26, at Chub Lake.

Varsity baseball returned to Cromwell this year for the first time since 2010, after the program was resurrected a few years ago with junior high ball. From 2011 through 2018, Cromwell-Wright athletes traveled to McGregor to play baseball.

The young Cardinals got on the board first in the opening half-inning when freshman Aiden Juhl crossed home plate after an overthrow to third on an attempted steal. He had reached earlier in the inning on a single and advanced to second on a steal.

The Bulldogs returned the favor in the bottom half of the first, when Aaron Ermatinger singled in starting pitcher Joey Solomon with what would turn out to be Carlton's only run of the game.

Cromwell-Wright went ahead for good in the fourth inning after seventh-grader Drew Nyberg scored on a passed ball after reaching earlier in the inning on a two-out walk, stealing second and advancing to third on a wild pitch. The Cards added an insurance run in the top of the seventh inning when sophomore Andrew Kachinske scored on a sacrifice fly after freshman Jackson Eastman fouled out deep behind first base.

Carlton had repeated opportunities to score in the second through the fifth innings, but timely strikeouts by Cardinal eighth-grader and starting pitcher Eliyah Belden and the defense behind him making clutch plays ended any additional Carlton threats.

Both starters went deep, with Belden finishing with seven strikeouts and one walk in five innings for Cromwell-Wright, while Carlton starter Joey Solomon pitched into the sixth inning before being relieved by Brody Vernon. The two combined for 13 strikeouts. Freshman Dylan Nyberg pitched the sixth and seventh innings for Cromwell-Wright, shutting down the Bulldogs in order on 15 pitches.

"Throwing strikes and putting the ball in play was key, especially early in the season," he said. "I was pleased with the way our defense came up big in clutch situations, too. This is a big deal for this program."

"Pretty well-played ballgame for this early in the year, especially with the weather. We made a couple more mistakes than Cromwell and our bats were sleepy, and that was it. All the credit in the world to Cromwell. They played really well."