Esko's Gwen Lilly competes in the hurdles at a track meet earlier this season.

Last Thursday six area boys and girls track teams met in Esko for the Esko Sports Alliance Showcase Invitational track meet. In the end the Esko boys and girls dominated to take first place, but there were plenty of amazing performances to go around.

Perhaps the most impressive performance was turned in by the Esko boys 4x100 relay team which ran a state best and school record: 43.57. Relay team members were Braden Lowe, Carter Zezulka, Mason Perich and Makoi Perich.

"People don't know how technical you need to be for the 4x100 exchanges when you have four athletes this fast," said Esko boys coach Gary Beaudot. "After they finished the race I immediately knew it was a record. I actually had to ask Carlton/Wrenshall coach Kevin Olesen to repeat the time after it was announced.

Another Esko team took second in the same race with a time of 50.94, including runners Fernando Scott, Jacion Owens, Evan Thompson and Talon Clifford.

In the 4x200 it was the Carlton/Wenshall team of Carter Woodall, Wesley Ward, Dante Thompson and Austin Larva winning in a time of 1:38.49 with Silver Bay finishing second and the Esko team of Gino Bertogliat, Javontae Gregory, Evan Thompson and Clifford Talon placing third.

Esko also took first in the 4x800 relay in a time of 8:48.99, with Keone Anderson, Brett Lillo, Nathanial Rengo and Benjamin Meysembourg on the winning squad. The Carlton/Wrenshall team of Carter Woodall, Andrew Olesen, Wesley Ward and Jack Riley was second.

The boy's 100-meter dash proved to be an impressive 1-2 razor-close finish for Esko with Braden Lowe nipping Mason Perich at the finish line. Lowe's time was 11.21 seconds and Perich finished in 11.24.

In the 800-meter run it was Nate Bilben of Silver Bay first, Carter O'Bey of South Ridge second, and Esko's Michael Cornell in third.

The triple jump was won by Esko's Makoi Perich with a leap of 40 feet, 8 inches with second going to teammate Carter Zezulka and third going to Dante Thompson of Carlton/Wrenshall.

Esko won the boys event with 777 points, Carlton/Wrenshall was second with 288 points. Silver Bay took third with 264 points, South Ridge was fourth with 246 points, McGregor was fifth with 156 points and Lakeview Christian Academy was sixth with 114 points.

On the girls side, the Eskomos dominated the 4x100 and 4x200 relays. In the 4x100 it was Emily Rengo, Kaitlyn McConnell, Tegan Erickson and Whitney Hanson racing to first in a time of 52.49, followed by the South Ridge team of Jaden Ellefson, Sophie Johnson, Ana Ridge and Jillian Sajdak in second.

In the 4x200, the Esko squad of Madison South, Reese Kuklinski, Megan Chopskie and Whitney Hanson ran to a first-place finish with a time of 1:57.01 while another Esko team took second.

"It is a blessing to be able to get the teams back on the track," said Esko girls coach Matt Peterson. "In the case of our team we have a lot of kids back and a lot of new talent as well and I expect as the weather warms up that there will be some exciting times being run."

Carlton/Wrenshall had an impressive performance in the 4x800 relay as the team of Abby Cid, Emma Cid, Morgan Laveau and Brielle Simula ran to first place in a time of 10:29.41. The Esko team of Eleanor Graddy, Grace Hrabik, Grace Shingledecker and Ingrid Hexum finished second.

Esko's Grace Shingledecker nabbed first in the 800-meter run in a time of 2:46.45, Sierra Gaetz of Silver Bay was second and Carlton/Wrenshall's Emma Cid was third.

The Raptors' Sarah Cid was the winner in the 1600-meter run in a time of 6:15.49 while Ingrid Hexum and Eleanor Grady of Esko were second and third.

In the 3200-meter run it was Grace Hrabik of Esko racing to a time of 13:11.12 and first place with Carlton/Wrenshall's Isabel Riley and Abby Cid finishing in second and third place, respectively.

Madison Wojtysiak of South Ridge was the winner of the shot put with a toss of 30 feet with second going to Esko's Maya Johnson with a throw of 29 feet, 3.5 inches. Julia Peterson of Carlton/Wrenshall was third.

Abby Resberg of Carlton/Wrenshall had an impressive throw of 78 feet, 8 inches to nab first place in the discus with Candace Berger of Esko taking second. 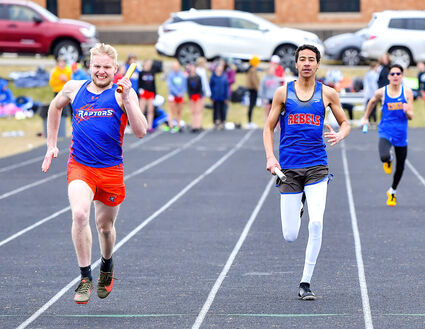 Wrenshall senior Austin Larva and Rebels freshman Chase Clausen race during a leg of the 4x200m relay at a track meet earlier this season.

In the pole vault Esko's Lauren Radovich and Alora Dammann ended up tied for first with a vault of 6 feet, 6 inches.

The long jump was won by Esko's Emily Rengo with a jump of 15 feet, 3.5-inches with teammate Kaitlyn McConnell finishing second and Whitney Hanson third.

Esko's Kyra Johnson had a PR in the triple jump with an impressive jump of 31 feet, 10 inches as teammates Madison South, Reese Kuklinski and Cadence Berger rounded out the top four.

Esko won the girls event with 784 points, Carlton/Wrenshall was second with 385. McGregor placed third with 229, Silver Bay fourth with 204, South Ridge fifth with 189 and Lakeview Christian Academy was fifth with 108 points.