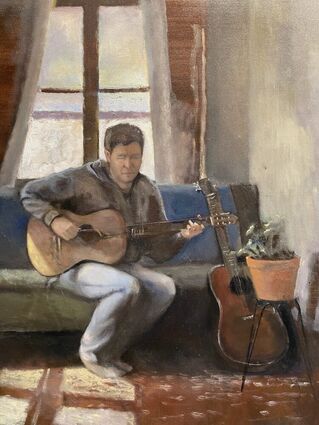 Wrenshall area artist Jake Tremble calls this painting "Discovering a New Song." Neighboring farmer Adam Kemp agreed to sit for the portrait, which Tremble based on a work by the French painter Édouard Manet of a guitar player, with his own contemporary spin.

Jake Tremble moved to Wrenshall a year ago in June with his girlfriend, Claire, and dog, Gracey. The couple had been living in Duluth, and he had been training as a classical painter at the Great Lakes Academy of Art. The two were looking to be part of a CSA (community supported agriculture) and found Wrenshall's own Northern Harvest Farm. What started as just a place to get vegetables turned into a job at the farm for Claire, and a home for the couple down the road in a farmhouse they share with another young farmer, Clara Salveson.

I caught up with Tremble as he was closing out his first major solo exhibition of artwork at the University of Wisconsin Superior's Holden Fine Arts center this past week. Many of the paintings on display were created in his Puype Road farmhouse and have connections to the Wrenshall terroir the artist has grown to love.

At the end of the summer last year, Tremble's housemate Salveson prepared a big outdoor meal for the entire Northern Harvest farm crew. He set up an easel to quickly sketch the gathering as the late August sun drenched the scene. Looking at the painting now, you can imagine the conversations and laughter coming from the table as reclining guests look out onto verdant fields.

Neighboring farmer Adam Kemp works at Northern Harvest and runs Uff-da Organics. He vividly remembers the meal. "Some of my favorite people were there - my dad, the crew, it was really special."

Kemp was looking for something special for his wife's birthday, and the two had recently built their own farmhouse. "We were looking at local artists, to start decorating the house and then I realized we've got a really local artist in Jake right nearby." He bought the study, and his wife was overjoyed. "Jackie really loved it and thought, you know, we should really have him do a painting of our farm." He pitched the idea to Tremble, who came up with a payment plan.

"I told him I would trade him the landscape if he would be willing to sit for me for a painting I had in mind," Tremble said.

Kemp was game. "It seemed like a nice thing to do in the winter."

Over the course of a few months Kemp would walk the half-mile down the road to Tremble's studio, sometimes with his young son, Morrie. "It started out of necessity," Kemp said. "Jackie would often have meetings on the days I was sitting for Jake." But the artist was patient and kind with the young study, even letting him add color to the corners of the work.

"I had a painting in mind when I started," Tremble said. "I wanted to redo a work by the French painter Édouard Manet of a guitar player, with my own contemporary spin on it."

But he had no idea he was working with such a knowledgeable subject. "When I showed the piece to Adam, he immediately started teaching me all these things about music - like why the musician would have been sitting like that. He even went and got his classical guitar in case I wanted to be more period-appropriate, so I put it next to him for the final piece." 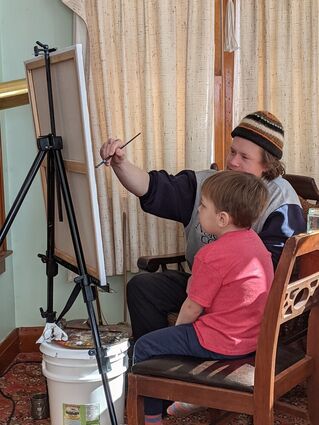 As the two sat together over the course of five or six sessions, they became close, sharing stories and conversation. To help pass the time, Kemp would pick at the instrument in his lap and a song eventually emerged. "I noticed it would sound different depending on what we had talked about that day," he said.

After the portrait was completed, Kemp found the song finished as well. He recorded it in the basement of Northern Harvest Farm and it now plays under an interview Tremble did with the curator of the UWS exhibition.

One particular work most Wrenshall residents would recognize is a landscape. While Tremble was able to set up a studio in the Puype farmhouse, he still maintained a job making ice cream at Love Creamery in Duluth. He drove the Highway 23 route often and would usually find himself stopping on the way back from work at Veterans Overlook. "There's nothing like that view," he said.

If you want to share your own Wrenshall-specific story ideas - let me know! Call 218-310-4703 or email [email protected]