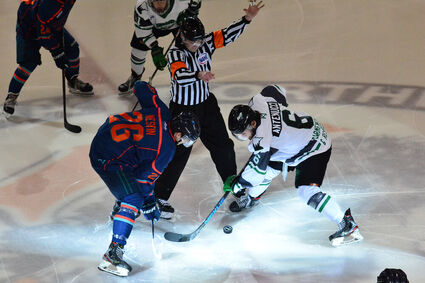 Minnesota Wilderness' Sam Antenucci takes the opening face-off under a spotlight as the Wilderness take on the Anchorage Wolverines Friday night in Cloquet.

A penalty-filled first period was too much for the Minnesota Wilderness to overcome in Friday night's home 5-1 playoff loss to the Anchorage Wolverines. The loss eliminated the Wilderness from the North American Hockey League playoffs as the Wolverines took the series three games to one.

"We got off to a rough start in the opening period," said Wilderness head coach Dave Boitz. "We started out down 2-0 and had three straight first-period penalties, which was just too big a hole for us to dig out of."

Jackson Reineke gave the Wolverines a lead at 6:01 of the first period on a rebound. Less than two minutes later, it was Colton Friesen finding the back of the net for a 2-0 lead.

The Wilderness appeared to pull to within a goal with just 15 seconds remaining in the opening period, but the goal was disallowed for a net that had become dislodged. Despite the setbacks, they still managed to outshoot the Wolverines 12-10.

"It was the same thing that happened when we played up in Anchorage," said Boitz. "There was just so much going against us. The penalties, two goals, a disallowed goal, it was a lot to overcome."

The Wilderness played a strong second period and outshot the Wolverines 14-6, but the lead remained 2-0 after two periods.

Will Persson eventually cut the lead to 2-1 early in the third period when he took a feed from Niko Rexine and slammed the puck into the Wolverines net, giving the home crowd some life.

"After the disallowed goal, the crowd was pretty worked up and they were in a frenzy," Boitz said.

Unfortunately, the Wolverines got a goal three minutes later from Andy Ramsey, followed by another goal from Bohdan Panasenko to push the lead to 4-1. The Wolverines added an empty net goal with a little over five minutes left in the game for the final of 5-1.

A valiant effort by the Wilderness saw them again outshoot Anchorage in the final frame, 14-8, and finish the game with a 40-24 shot advantage, but they would not get any closer.

Kausch took the loss for Minnesota with 19 saves on 24 shots. The veteran from Duluth started in place of the injured Matt Smith, and finished the playoffs with an 0-2 record. The Wilderness also played without its top regular season goal scorer. Max Neill, who put up 21 goals while playing all 60 games in the regular docket, was kept out due to an injury suffered early in Game 3.

The loss ended the Wilderness season, which provided local hockey fans a ton of great moments.

"We started the season hot, then had a nine-game losing streak, and after Christmas we went on a tear where we finished 23-6-1," Boitz said. "I'm proud of the guys. We have a lot of players that are getting Division I college scholarships, so hopefully we did our job and got kids ready for the next level." 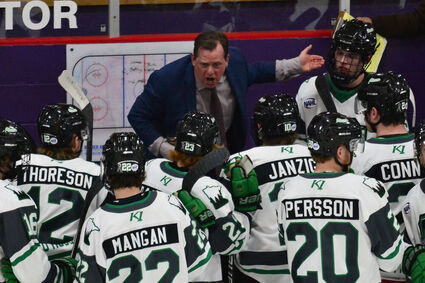 The current roster has four defensemen who have accepted scholarships, as well as eight forwards. A number of other players should be signing Division I rides in the next few weeks. The Wilderness also have two players currently being scouted for the NHL draft: Aaron Pionk and Barrett Hall.

"We will probably have anywhere from eight to 14 players who will come back next year," Boitz said. If they can return a core of that many players, look for the Wilderness to provide another exciting season for area hockey fans.

The win allows Anchorage to continue its first season in the NAHL as Midwest Division champions, and will play this weekend in the "Fogerty Four" - the league semi-finals at Fogerty Arena in Blaine, Minnesota. The third round of the playoffs will be a best two-out-of-three format, with Game 1 set for Friday. The tournament will wrap up Tuesday, May 24, with a single-game final round.