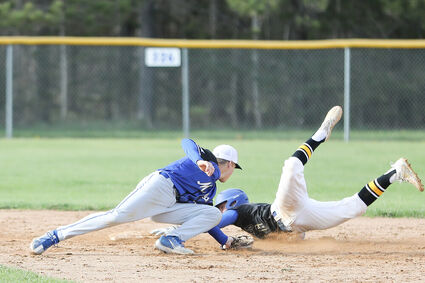 Esko's Kade Gonsorowski dives into second base safe ahead of the game from Mora's Seth Hatch during Friday's baseball game.

Sporting a roster that includes only one senior, one might expect a rebuilding year for the Esko baseball team. Instead, the Eskomos are 14-3 and are currently fighting for the top seed in Section 7AA along with another AA perennial power, Duluth Marshall.

"Any given game we might start as many as four or five juniors and the same number of sophomores," said Esko coach Ben Haugen. "We have two classes of kids who have played a lot of baseball. I am a little surprised at how we've done so far, but I knew we'd be good by the end of the season."

A hallmark of this year's Esko team is the ability to hit, which has led to high run production and some gaudy offensive statistics. In Friday's 15-7 game against Mora, the Eskomos got two home runs from Cale Haugen in a 3-for-5 effort. Isaak Sertich also smashed a homerun and had two hits, while Sam Haugen finished with two doubles.

"We really don't have any holes in our lineup, and that's our strength," Haugen said. "Along with our hitting, we have some solid pitching right now. We need to figure things out on defense."

On the mound, the Eskomos are led by Cale Haugen - who has been nothing short of dominant. In his last outing he went six innings and struck out 16 of 18 batters. In his last three games, he has fanned 40 batters.

Cale Haugen is not the only good pitcher. Esko can also bring in Finn Furcht, Sam Haugen, Cal Berglund, Isaac Sertich and Dylan Marciulionis, who can all be tough for the opposition to deal with. 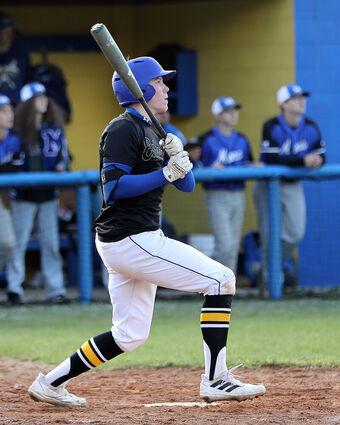 Esko's Cale Haugen watches one of his two home runs during Friday's baseball game with Mora.

"We are deep on the mound," said coach Haugen. "With the way this spring has been, we need to have guys who can pitch a lot of innings, and we have a good core of pitchers."

With a talented core of pitchers and hitters, the Eskomos are on the precipice of a possible state tournament berth.

"At the beginning of the season I thought we were for sure a year away," said Haugen. "Right now, with how we've played, you just never know."