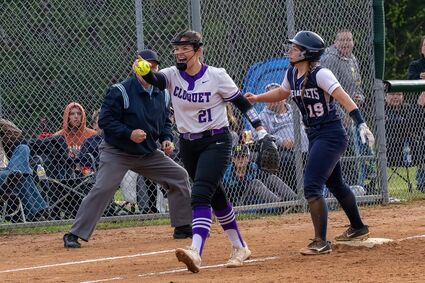 Cloquet senior Justice Paro celebrates a third out against the Hibbing Bluejackets in the Lumberjacks' second game Saturday. Cloquet lost 4-2 in their second defeat of the day and final loss of the season.

After opening the Section 7AAA softball tournament with a win over Grand Rapids, the Cloquet Lumberjacks were eliminated with back-to-back losses to Chisago Lakes and Hibbing Saturday.

The Lumberjacks dominated Grand Rapids in the early part of last Wednesday's section opener and raced to an 11-3 lead after three innings. Then the Thunderhawks found a way to answer with nine runs in the fourth to gain a 12-11 lead. In the bottom of the fifth inning, Cloquet scored five runs to shut the door on a 16-12 win.

"It was a game of high excitement and rallies," said Cloquet coach Tyler Korby. "I've never seen a rally like Grand Rapids had in the fourth inning. It happened so fast that we were reeling a bit, but give credit to our kids - they fought back and got the win."

The first-round win put the Lumberjacks into the undefeated round of four. Cloquet fell 10-0 against a powerful Chisago Lakes team, managing just three hits in the game. Martin, Goranson and Allie Jones were the only 'Jacks to get a hit against the Wildcats.

"Chisago is so good in all facets of the game," Korby said. "They've got a good club and they looked really solid. They are the real deal."

Following the loss to the Wildcats the Lumberjacks faced the Hibbing Bluejackets. The game was scoreless through four innings before the Bluejackets erupted for four runs in the top of the fifth inning. Cloquet responded with a pair of runs in the bottom of the sixth, but that was all they could muster as the season ended with the 4-2 loss.

"It was like déjà vu all over again," Korby said. "We lost to Hibbing in the same round last year. We had bases loaded in both the sixth and seventh innings but couldn't come up with the timely hit to get the tying run." 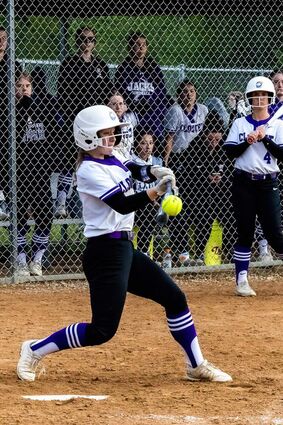 Cloquet's Alexis Goranson connects with the ball against the Bluejackets Saturday.

Dana Jones, Martin, Johnson and Roena Diver had Cloquet's four hits in the loss. Allie Jones pitched a complete game, giving up only one earned run and just four hits.

"We will miss those girls. They played a lot of ball for us," Korby said. "This team may have not gotten as deep in the playoffs as we wanted to, but we grew so much. I was especially proud of our battery as Allie Jones stepped in at pitcher and Lexi Goranson at catcher, and both did a remarkable job for us."

Cloquet finished the season with a 13-7 record. Chisago Lakes was set to face Hermantown or Hibbing in the section final Thursday.