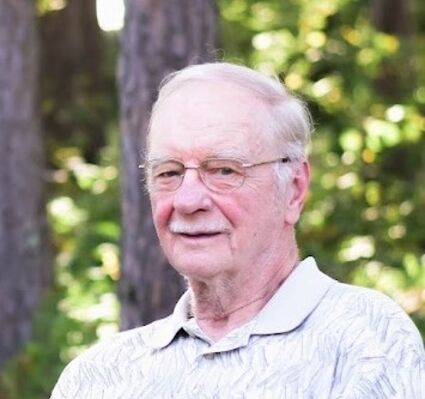 Dennis Max Robnik of Esko went home to be with Jesus on June 2, 2022, at Evergreen Knoll in Cloquet, three weeks before his 82nd birthday. Dennis was born on June 22, 1940, in Chisholm to Lillian and Louis Robnik. He enjoyed swimming, fishing and camping on the Iron Range with family and friends and especially enjoyed taking trips to the Boundary Waters. He graduated from Chisholm High School in 1958. Dennis attended University of Minnesota Duluth and earned a degree in accounting in 1963. He met his future wife, MaryAnn Hill, while working in the cafeteria there, and the two wed on April 28, 1962. Dennis worked for Minnesota Power as an accountant and then as one of their first computer programmers. He later taught computer programming at the Sandstone federal prison and St. Paul Technical College for 22 years. He also worked as a computer systems analyst for the U.S. Postal Service in Eagan for 20 years.

Dennis had a passion for books, and his hobby turned into a side business. He owned the Book Nook store in Duluth, and had a thriving store on eBay, Esko Stuff, which he ran for 24 years until the end of March. Dennis and MaryAnn were involved at Journey Christian Church for nearly 40 years and recently celebrated their 60th wedding anniversary April 28.

Dennis was preceded in death by his parents and his brother, Bruce Robnik. He is survived by his wife, MaryAnn (Hill) Robnik; his brother Dr. Spencer (Judith) Robnik; and his four sons and daughter, Dan (Pat), Don, Andrew (Amy), Amy (Eric) Joob, and Adam (Joanna). He is also survived by 20 grandchildren and 10 great-grandchildren.

Dennis’ family wants to express their deep appreciation to the staff at Evergreen Knoll and St. Croix Hospice, who cared so professionally and lovingly for him these past six weeks.

Visitation: 3 p.m. until the 4:30 Celebration of Life Sunday, June 12 at Journey Christian Church in Cloquet. A light supper will be served at the church following the service. Instead of flowers, please send memorials to Kingdom Builders Ministries at 103 Ave. C, Cloquet MN 55720 or kbmcloquet.com.