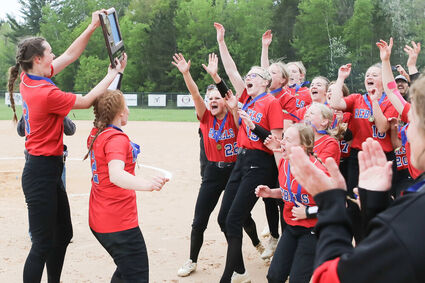 Last Tuesday the Moose Lake/Willow River girls softball team got a wake-up call. For only the fourth time this season, the Rebels lost - this time to Carlton/Wrenshall in the Section 7A playoffs. The Rebels used that loss as a catalyst to rebound by winning five straight games on their way to the Section 7A title.

In those five games the Rebels piled up 53 runs while giving up just two runs.

"Give Carlton/Wrenshall and their pitcher Abby Mitchell credit when they beat us," said Rebels coach Kelly Goeb. "Abby pitched a good game and we had a couple of flukey things happen, and we just lost."

Following the loss, the Rebels returned to the practice field and spent the next few days hitting, hitting and ... well, you get the idea.

Following the loss, ML/WR returned to the field the day after Memorial Day, where they won three straight - over South Ridge, Silver Bay and Carlton/Wrenshall - by a combined 34-0 score. Those wins, which were reported in last week's Pine Knot, set the Rebels up for the championship round against the Cherry Tigers, then unbeaten in tournament play. The Rebels would have to beat the Tigers twice in order to advance to their first state tournament in 40 years.

"Going into the finals on Thursday, we were confident," Goeb said. "Our girls just had the desire to win and our plan was to play the two games like they were just one long game. I told them we need to be ahead at halftime and at the end of the game."

Cherry got on the board in the first inning when leadoff batter Lauren Staples singled, was sacrificed to second on a bunt, stole third and then scored on a passed ball. That was the only run for the Tigers.

ML/WR tied the game in the fourth inning when Natalie Mikrot singled and went to second on a groundout before scoring on a base hit by Janna Bode. In the fifth inning, the Rebels exploded for four runs as Hannah Roach, Megan Hattenberger, Hallie Klavu and Sandra Ribich all scored to give them a 5-1 lead.

"That was a big inning for us and we fed off that momentum," said Goeb. "The bats started slow, but once we got the run and tied it, the girls just knew they could get to their senior pitcher, and we did."

Sarah Christy was the winning pitcher for the Rebels. After allowing the first batter of the game to score, Christy shut down the Tigers and allowed only two hits in her six innings of work. Alexis Hoffman pitched the seventh for the Rebels and gave up one hit while striking out two.

"Sarah came out on fire and threw a heck of a game," Goeb said. "We threw Hoffman in the seventh and she threw just as hard as any of the pitchers in the game for both teams."

Entering the winner-take-all championship game, the Rebels won the toss and were the home team in what would turn out to be an 11-1 walk-off win.

Staples led the game off - as she did in the first game - by scoring the first run of the game and giving the Tigers a 1-0 lead. But the Rebels wasted little time in bouncing back by scoring three runs in the bottom of the first inning to go ahead 3-1. Klavu, Christy and Ribich all scored with the big hit in the inning being a two-run double by Lily Kahara.

In the second inning, Roach bashed a triple and scored on a sacrifice fly by Hattenberger to push the lead to 4-1. The Rebels put the game out of reach in the fifth as Roach, Klavu, Christy, Ribich, Mikrot and Kahara all scored to push the lead to 10-1. ML/WR ended the game in the bottom of the sixth inning when Kahara singled to score Christy for the 11-1 win.

The Rebels smacked out 13 hits in the game with the sophomore Kahara leading the way with 13 hits. Klavu, Christy and Bode all had two hits each.

After the final run was scored, the Rebels erupted in celebration on the field.

"When you win, it is a mixture of relief and excitement," Goeb said. "We knew we could do it with our pitching, our defense and our hitting. It was just a great moment." 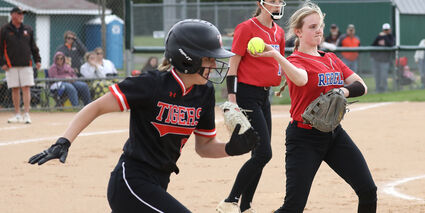 Moose Lake/Willow River first baseman Sandra Ribich makes the play to get Cherry's Hailey Greenly out on a bunt attempt during Thursday's Section 7A championships at Braun Park.

Christy picked up the pitching win by going the whole way, allowing one earned run and four hits and not walking a batter.

The section title is the first for the Moose Lake/Willow River cooperative in softball. It was 40 years ago, when the Moose Lake Laker girls team won the state tournament with Annie Adamczak picking up the pitching win.

"The girls are excited and we are ready to go down and show what kind of team we have," Goeb said. "We think with our hitting, pitching and defense that we can have a good showing down in Mankato."

UPDATE FROM STATE: The Rebels won their first two games at state Thursday, June 9, defeating Wabasha-Kellogg High School 8-0 in a 1 p.m. game in Mankato, then taking down Randolph High School 3-2 in a 7 p.m. game to advance to the championship game against Nicollet High School at 2:30 p.m. Friday, June 10.