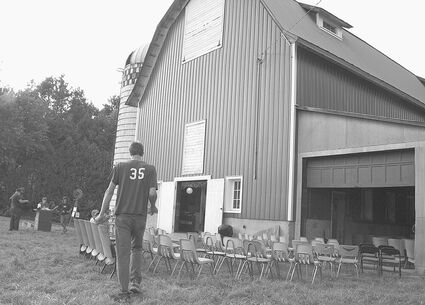 If the movies weren’t enough, next week’s Free Range Film Festival in Wrenshall will have a twist: live music. The Denfeld Honors Quartet will provide music at intermission Friday, June 24 and guitarist Darin Bergsven will provide entertainment Saturday, June 25.

Annie Dugan, one of the festival founders who lives down the road from the former milk barn-turned-theater, announced the festival lineup of independent films last week. There will be a food truck onsite and a “giant century-old barn with fireflies in the field across the road,” she said.

Begun in 2004, the festival is held at the junction of Carlton County roads 1 and 4 just a mile south of Wrenshall. The last festival was in August of 2021 after a pandemic break in 2020 and during a downturn in infections in the county.

The festival, which starts at 7 p.m. Friday and Saturday with the simultaneous screening of films on three screens set up in and near the barn, “provides a forum for filmmakers, film lovers, barn enthusiasts and country-living aficionados,” Dugan said, with the 2022 schedule offering an “eclectic mix of animation, documentary, narrative fiction and experimental eye candy.”

Some of the filmmakers and those who are subjects of the films are expected to be in attendance.

The featured film on Friday is wholly appropriate for the setting: “A Life on the Farm,” a look at the bizarre home video film made by an eccentric farmer in England.

Saturday features “Everything in the End,” a film about being stranded in Iceland.

Here is the lineup:

• “Hive Mind,” by Zeke Hanson, the story of bees, in one minute.

• “Final Chapter,” by Conor Holt, a seven-minute film on the fate of the decades-old Bargain Books in Van Nuys, California.

• “Almost Normal, Through the Eyes of Autism,” by John Austin. Austin can communicate in a whole different way — backwards. 30 minutes

• “Que Haces Aqui? A Documentary About Karen,” by Rob Rook. Karen was a prosecutor living in Chicago; now she is moving to Mexico City to write the telenovela she’s always wanted to watch. 25 minutes

• “A Life on the Farm,” by Oscar Harding. In 90 minutes, Oscar Harding does a documentary dive into the home video trove of Charles Carson and Coombe End Farm.

• “Circus of the Squares,” by John Akre. Four minutes of squares showing off their four sides.

• “Say His Name,” by Cy Dodson. Dodson lives in Minneapolis, blocks away from where George Floyd was murdered May 25, 2020. It is an immersive observation, coming in at 21 minutes, of the unrest that followed and a look at a community that united amidst chaos.

• “film factory: #1648823612092,” by Kathy McTavish. Duluth’s McTavish believes art has the potential to open subliminal, submerged aspects to foster reflection and transformation in this five-minute film.

• “Love Letter to Learning to Drive,” by Maija Hecht, a 14-minute film adapted from a short story adapted from pink sticky notes, about summer, love, and a car.

• “Madweyaashkaa: The Waves Can be Heard,” by Moira Villiard. What does resilience mean in an urban setting? 12 minutes

• “The Old People Affair,” by Mike Scholtz. A sneak peek at a documentary film in progress, Scholtz, an organizer of the festival, follows the two-time theft and recovery of a soup kitchen masterpiece. 10 minutes

• “Everything in the End,” by Mylissa Fitzsimmons. Stranded in Iceland, a man seeks solace in the brief human connections he encounters as the world is ending. 80 minutes