South Ridge gets an edge and Section 7A title

The South Ridge Panthers pose with their Section 7A championship trophy.

With the Section 7A baseball championship on the line in the top of the seventh inning, South Ridge Panthers coach Aaron Weber made a visit to the pitching mound and starting pitcher Christian Pretasky. Pretasky had thrown over 100 pitches and was starting to show signs of tiring against the Ely Timberwolves, but Weber made the decision to ride his starter to the end of the game. The decision turned out to be the right one, as the Panthers slipped away with a 3-2 win.

South Ridge entered the state tournament this week, the fourth appearance in the last four tournaments.

"He's a bulldog, and has been all year for us," said Weber. "He was struggling with his control, and I think he thought I was going to take him out of the game. I told him 'You are the guy, you have to finish this.'"

Pretasky was able to pitch out of trouble as the Panthers hung on for the win and now advance to the Minnesota Class A state baseball tournament.

"I'm not going to lie, my heart was pounding pretty good in that last inning," said Weber. "Last year we won by 10 runs over North Woods, so it was decided early, but this one was pretty intense."

Leading 3-1 entering the final inning, Pretasky walked the first two batters of the inning. Eventually, he got a strikeout and a pair of ground balls to third baseman Aydin Archambault to end the game.

Ely grabbed a 1-0 lead after two innings, but the Panthers answered back to tie the game in the bottom of the third inning. Pretasky led off with a base hit and Zach Morse came in to courtesy run for Pretasky. Morse stole second and scored on a hit by Carter Anderson.

In the fifth inning the Panthers added another run when Pretasky led off again with a single and Morse came in to run for the pitcher. Again Morse stole second and then scored on a single by Josiah Deloach, putting South Ridge ahead 2-1.

The Panthers added an important run in the bottom of the sixth the same way they scored the first two runs when Pretasky singled: Morse came in on a courtesy run and stole second, but this time he scored on a hit by Wyatt Olson.

The third run loomed large for the Panthers because the Timberwolves were able to squeak one run across in the top of the seventh off of one of the groundouts to third baseman Archambault. Then Pretasky was able to induce the final grounder to Archambault and South Ridge left the field as the champions again.

"Archambeault had a solid game for us at third," said Weber. "He had six or seven putouts himself and played a defensively strong game." 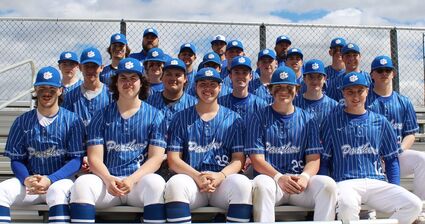 The South Ridge varsity baseball team won another Section 7A championship last week. The team lost its two games in the state Class A baseball tournament in St. Cloud.

While Pretasky was holding the Timberwolves to just three hits, the Panthers recorded nine hits in the game. Pretasky, Kaden Lane and Deloach all finished with two hits each.

South Ridge received the No. 5 seed in the state Class A tournament and lost 10-4 to No. 4 seed Sacred Heart (in East Grand Forks) Tuesday afternoon at Joe Faber Field in St. Cloud.

In the consolation round on Wednesday morning, the Panthers lost 8-4 to New Ulm Cathedral, ending the season.