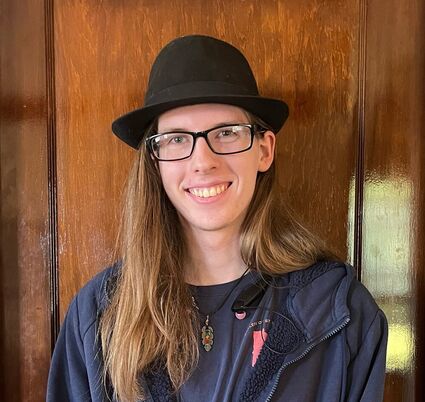 The celebration of Pride Month each June has become more and more familiar over the years since gaining popularity in the early 1970s. The purpose of this celebration is to appreciate the LGBTQIA+ community and to allow people who identify with this group to feel safe and supported.

This year, a group of high school students in Wrenshall school, including myself, gathered in celebration of the first day of Pride Month and the last full day of the school year. That day, we decided to print out a number of rainbow flags in the form of posters. These flags are symbols representing the various genders and sexualities found within the LGBTQIA+ community.

After getting permission from principal Michelle Blanchard, the group of students put up these flags around the school, especially in the hallway just at the top of the main stairs. These flags were meant to honor students within the school who identify as part of the Pride community, and to show support for them.

The support was not shared by all students at the school, and many actively worked against the group’s designs. Flags were torn down, crumpled into balls, and thrown into garbage bins with complete disdain for the respectful sentiment they stood for. Anger and hatred was found in response to a show of respect and love, a reaction whose stem is rooted in misunderstanding and apprehension.

Listening to reactions in the hallway, one quote stuck with me. It defines the misinterpretations regarding Pride Month and the spirit of Pride in general. In opposition to the flags around them, one person said, “I just don’t see why they have to force their sexuality on us.”

In the entire history of Pride, the LGBTQIA+ community has never set out with the goal of forcing their sexuality on others. The goal of Pride Month, as well as Pride in general, has always been to celebrate community, and to normalize the idea of love and kindness toward LGBTQIA+ people. It has never been to oppress or convert heterosexual, heteroromantic, and cisgender people. The goal is to show that people outside of these “norms” are just as real and human as people within.

When I first heard this line of critique in the hallway, I couldn’t wrap my head around this line of thinking. Even now, the thought that Pride flags are somehow symbols of oppression and obligation seems so antithetical to the entire idea of equality and autonomy which they stand for. The fact that this person has these views cannot be overlooked, or passed off simply as words of hatred. This line of thinking does not come from anger, but from simple misunderstanding.

This is why Pride Month, as well as open discussion about the LGBTQIA+ community, is so important. There is so much misinterpretation, confusion, and inaccurate ideas about the Pride community’s goals, as well as obstacles faced in reaching these goals. The only way to allow for understanding is by first allowing this community into the open, and by giving them a space to speak on even ground.

During this past year, I have been a part of Wrenshall school’s Genders and Sexualities Alliance, which has been advocating for this type of discussion and compassion since its inception. Notably, there had been a proposition regarding a student training program hosted by OutFront, a well-known and trusted nonprofit organization promoting equity for LGBTQIA+ people in an accurate and approachable way.

This proposition was brought to the school board, but never made it past that stage. This choice to halt the decision making process garnered much attention from students. Writing letters to the school board, many students explained how they felt failed by their school. The OutFront session would have been a first step toward understanding within the school. These students felt hurt that the board had failed to move the plan forward because it should have had students’ best interests as its highest priority.

These examples show the obstacles put in the way of the LGBTQIA+ community and its goals, both on an individual basis of active antagonism and on a more systemic lack of awareness and observation.

This is not to say that progress cannot be made. The best thing to come from these impediments would be to spark conversation. To allow for discussion and create a stage for these difficulties to come to light. To allow confusion to be announced, questions to be asked, and explanations offered can open the way for compassion. The first step toward empathy is to inquire with the intent to understand. The first step toward love is Pride.

My name is Sage Fernquist, and my pronouns change based on the day, so they/them works as a general term. I recently graduated as Valedictorian from Wrenshall School in the class of 2022, and I identify as Pansexual, Panromantic, and Genderfluid. I am fiercely supportive of the family I have found within the GSA at Wrenshall, and find myself being protective of them when I feel they are being misrepresented or neglected.

Below one will find a list of definitions for terms used to refer to LGBTQIA+ topics. These definitions are a basic look into these terms, and may not capture the full scope of the topics, but are to be used as an “at-a-glance” description.

LGBTQIA+ Community: An acronym meaning Lesbian, Gay, Bi, Trans, Queer, Intersex, and Ace/Aro, with the plus sign indicating that many more identities are recognized, but including them all would be almost impossible. This community includes intersex individuals and any person who do not identify as Heterosexual, Heteroromantic, and/or Cisgender. Throughout this article, the terms LGBTQIA+ community and Pride community are used interchangeably. This may not always be the case.

Cisgender: A term referring to someone whose gender aligns with their assigned gender from birth. Sometimes shortened to “Cis”.

Genders and Sexualities Alliance: Also known as a GSA, this is a club or organization aimed to make LGBTQIA+ students feel comfortable at school, as well as being a safe place for people who do not identify as LGBTQIA+ to learn more about Pride and better understand their peers. In Wrenshall, this is a place for people of various identities to come together, both to socialize with one another as well as advocate for the changes they wish to see in the school.

Pansexual/Panromantic: While sexual and romantic attraction are not the same, many people’s physical and emotional sexualities are based on the same parameters, and are often grouped together into a single sexuality. Generally, Pansexual/Panromantic is shortened to the single syllable of “Pan”. Although it may be an amusing joke (and one I have made at my own expense many a time), people who are Pan are not, in fact, attracted to cookware. In my own experience, being Pan simply means that my attraction, whether it be physical or romantic, does not differentiate based on gender. It is instead based on other things that are typical bases for attraction, such as age, good-looks, fashion, kindness, confidence, etc.

Genderfluid: Based on my own understanding of how I feel, genderfluidity means that I could be a man one day, a woman for the next day and a half, then change to something more non-binary halfway through the day. However, this is only my experience with this identity, and I know others that are much more stable in their genders, and there may be many that fluctuate even more than I do. I also know that my pronouns change as my gender changes, having others use they/them in reference to me when I am not there to confirm my pronouns for the day. Of course, other people may choose not to change their pronouns this way, or at least not as regularly. Because of the amount of differentiation between people, even people within the same identity, it is always best to ask questions before making an assumption.