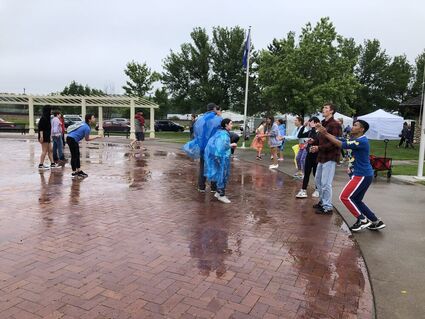 The water balloon toss was still a hit, because what harm is a little more water when you're already wet?

The July Fourth parade was the first domino to fall Monday in Cloquet. Later, after a chilly wet afternoon at Veterans Park, organizers elected to delay the movie in the park and fireworks until July 5.

"It will be drier and warmer tomorrow, so people can enjoy both the evening events without feeling like they have hypothermia," said co-coordinator Ivan Hohnstadt after a day that never reached the 60 degree mark.

The Northeastern Hotel, Saloon and Grille still plans to offer live music from 5-9 pm on July Fourth, and folks are invited back to the Dunlap Island bar on Tuesday to watch the fireworks with a drink.

Otherwise the Peanuts movie will be featured Tuesday night at Veterans Park, starting at approximately 8:30-8:45, with fireworks over the St. Louis River to follow. Nearly all of the food trucks will return at 4 p.m. Tuesday and remain through the fireworks.

A giant, very local blast of lightning, ominous radar and a predicted storm led to the cancellation of the parade Monday morning. Co-coordinator Jana Peterson said she made the call after a conversation with a meteorologist and seeing lightning. 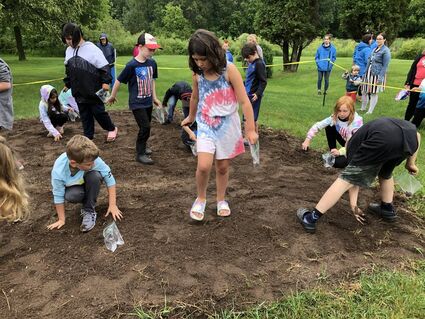 Kids dig for quarters in the Dash for Cash during Monday's July Fourth activities at Veterans Park.

"We had kids on metal trailers and people walking around putting flagpoles up – I went for safety over tradition," Peterson said.

Things at the park picked up as the afternoon went on and the rain slowed down. A mid-afternoon shower sent people scurrying to the picnic shelter, where they found a volunteer group from out of state doing temporary tattoos and later Amazing Charles making balloon animals. The Circus Family Fun station was lots of fun, and kids were thrilled with the bouncies and bungee trampolines.

"Those who came to the park seemed determined to have fun, regardless of the weather," Hohnstadt said. "We just hope they come back tomorrow for more fun ... and better weather."

The cities of Duluth and Superior both postponed their July Fourth fireworks as well.