Cities prep for a birthday party 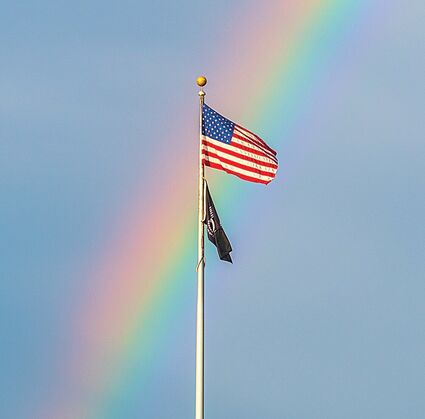 Who knew that 2019 would be the last of big Fourth of July celebrations in Cloquet for two years as the Covid-19 pandemic hit in 2020? The photos are all from the celebration in 2019: Rain bringing a rainbow, fireworks, pie eating, an outdoor movie, the big parade and quarters in a sandpile. On Monday, expect all of those events to return and more at Veterans Memorial Park and throughout the city after the parade.

The Carlton County forecast for Monday includes a military flyover and parades in the morning, followed by family-friendly fun all afternoon and a movie and fireworks at night.

As of Wednesday morning, it also included a 40-percent chance of rain, but Cloquet July Fourth organizers are optimistic ... and determined. "We haven't had to cancel in the past 10 years, maybe ever, so we are hopeful Mother Nature will work around our activities," said co-coordinator Jana Peterson.

Both the communities of Cloquet and Moose Lake are planning a fairly full day of activities in honor of the nation's birthday.

Events in Cloquet kick off with the Sawdust 5K race at 8 a.m. at Pinehurst Park, followed by the July Fourth car show at the Northeastern Hotel, Saloon and Grille on Dunlap Island starting at 10 a.m. with grilled food and a full bar available.

The 1-miler race starts at 10:40 a.m. next to Northwoods Credit Union on Avenue B. After a quick turn by Sappi, the 1-mile race follows the parade route down Cloquet Avenue, ensuring runners a large crowd for their race.

The parade starts at 11 a.m. with lineup at 10 a.m., and travels down Cloquet Avenue from 18th Street to Eighth Street. The Carlton County Disabled American Veterans Chapter 18 were selected as grand marshals of this year's July Fourth parade, because of all they do for the community and for veterans. (See Page 4 for the story.)

Following the parade, there are choices to be made. Head to Veterans Park for an afternoon of family fun, tasty fair food items, helicopter rides and more.

At Pinehurst Park, the annual 3-on-3 basketball tournament starts at noon and The Beach will be open, weather permitting. The car show at the Northeastern lasts until 3 p.m.

Activities at Veterans Park will be familiar, and many are free. The Dash for Cash, when kids dig in sand for quarters, will return at 1 p.m., and the pie eating contest is set for 3 p.m., with blueberry and cherry pies courtesy of Super One. Amazing Charles will return to make balloon animals and do magic from 2-4 p.m. Other activities include wiffleball games and a variety of inflatable bouncies that are free of charge from noon to 4 p.m., along with kids' races and water balloon tosses, and music on a smaller scale. New this year is the Circus Family Fun Station, which features a play area for families with spinning plates, juggling balls, and other fun things to play with. Bob Evans and his juggling students will be there to demonstrate stunts and play along with people from 12-2 p.m.

Paid attractions at Veterans Park include the popular bungee trampolines, bouncies after 4 p.m., and helicopter rides that take off from a lot next to Veterans Park. Temporary tattoos will replace face painting this year, due to Covid-19 concerns because of the extended face-to-face time, organizers said.

A variety of food trucks will return to Veterans Park as well, including mini donuts, corn dogs, cheese curds, kettle corn, ice cream and more. Holy Smokes will offer smoked meat sandwiches and Julie's Eggrolls will be there, along with other local favorites.

Veterans Park activities will taper off at 4 p.m. while the basketball tournament is expected to finish around 5 p.m. with awards for tournament champs, tournament MVP, best "youngins" and "most drip," organizer Paul Cameron said. "That could be the way they play, or the way they show up and dress," he explained.

The car show officially ends at 3 p.m. but Northeastern owner Bert Whittington said they will also have live music 6-10 p.m., ending just before the fireworks.

The featured movie in the park - "The Peanuts Movie" - begins at approximately 8:45 p.m., but folks are encouraged to come early to find a good spot to watch.

The grand finale in Cloquet is the fireworks display over the St. Louis River near the Highway 33 crossing and Veterans Park should begin around 10:10 p.m.

Back to the weather. Although a gentle rain won't lead to cancellations, sustained thunderstorms could. In that case, the movie in the park and fireworks would be delayed 24 hours, to Tuesday night. Find the full schedule of events and major sponsors on Page 20 and find parade and donation forms and more details at cloquetfourthofjuly.com. For updates Monday, find the Facebook page at @cloquet4thofJulyFestival.

The July Fourth festivities start early in Moose Lake, with a Kiddie Parade at 10 a.m. Saturday, July 2. The parade down Elm Avenue starts by the H&R Block Building, with lineup 15-20 minutes before 10 a.m., and will end at Hope Lutheran Church.

There will be live music at Moose Lake Municipal Liquor both Saturday and Sunday night 8 p.m. to midnight. 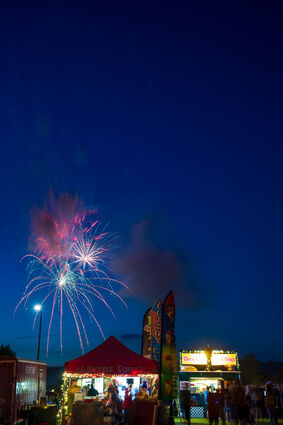 On Sunday, a bean bag tournament at the Muni starts at 11 a.m. and bingo runs noon to 8 p.m. at the Moose Lake City Park, courtesy of American Legion Post 379.

On July Fourth, there's a full day's worth of fun. The "Stars and Stripes Forever" themed parade begins at 10 a.m., followed by an "old fashioned celebration" and bingo noon to 10 p.m. at Moose Lake City Park. "The Goonies" will show for free at 1 p.m. at Lake Theatre, 320 Elm Ave.

Make sure you find a good spot at Moose Lake City Park to watch the fireworks, which are expected to begin at 10 p.m.