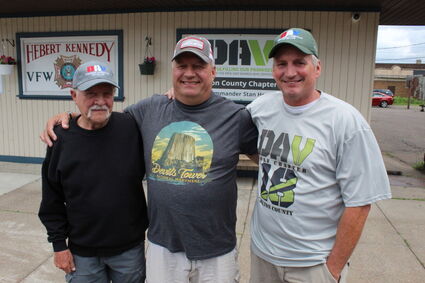 From left, Gary Dahl, Stan Heuer and Raffy Johnson help lead the Carlton County DAV together, and they will also represent the DAV in Monday's July Fourth parade, as grand marshals.

In a world where veteran organizations are shrinking, this group is growing faster than similar organizations across the country. In a time when volunteers are often hard to find, this group has stepped up for the community too, taking over the Christmas and Thanksgiving community meals.

This year's July Fourth grand marshal is not one, but many: the nearly 650 members of the Carlton County Disabled American Veterans (DAV), Chapter 18.

"It was an easy choice to make," said Ivan Hohnstadt, Cloquet Fourth of July co-coordinator. "Sometimes it feels like the DAV is everywhere - they do so much for the community."

The Pine Knot News sat down with three of the local DAV's core leaders: DAV commander Stan Heuer, DAV and VFW senior vice commander Gary Dahl and DAV treasurer Raffy Johnson, who should really be called event coordinator extraordinaire. Three generations of leaders, the trio will represent their growing group in Monday's parade. It's something the dedicated leaders do every day.

They don't mind giving time and energy to the DAV and its many causes, Heuer said.

"For me, it fills my soul being able to help the veteran who has nothing and needs our help," the commander said. "That's what keeps me going, keeps the drive going, just to help [those] who are in need."

Johnson said it's the camaraderie that draws him in. "I like getting together, that camaraderie, and I like to make events that vets can come to and have fun," he said.

As for Dahl, he is a leader in the DAV, the Cloquet VFW and a member of the Cloquet American Legion. His little red truck is parked outside the VFW most days, as he keeps things ticking at the building in West End Cloquet, now home to all three veterans groups, plus the Cloquet Eagles Club.

"It's just the group. Everybody that gets together, you get that good feeling and you're able to help out people," he said.

Fellow DAV member Ron Stigers shared a story that was typical, yet spoke to the essence of the group, of how an out-of-town veteran stopped at the VFW after seeing an oncologist in Duluth, then getting into a car accident and facing extensive automobile repairs. He was headed back to Missouri with only $7 to his name. They all chipped in, giving him $20 apiece, and $200 in gas cards that Johnson found.

That's the kind of thing veterans do for each other, they said. They have helped veterans find housing, and furnished numerous homes and apartments with donated items. They have given vehicles - often donated and repaired - to veterans and veterans organizations. They support 23rd Veteran, the St. Cloud Veterans Hospital and Silver Bay Veterans Home, veteran fishing and camping trips and more. They also host many events for their own members along with the community meals twice a year.

To pay for all that, the DAV holds numerous fundraisers. The clothing drive (collected in bright green boxes around the county) is their biggest fundraiser, with donations adding up to 481,000 pounds of clothing last year alone.

New members are always welcome. Nonveterans can join the auxiliary, which is growing almost as quickly as the DAV.

Johnson said they often recruit just by talking to people. "Maybe you have a younger soldier who may not have lost a leg. They don't have a Purple Heart, so they feel like they haven't made the sacrifice that others have. But that's not correct. It doesn't matter what happened, there's always problems. And we're here to help."

Once folks give it a try, they usually come back, said Heuer. But there's no pressure.

"The camaraderie in our chapter is second to none," Heuer said. "It's awesome when you see us all together. And you can pick out the veterans in the group right away, because we're all giving each other a little bit of crap. That's just what we do and always will do. It all helps us with individual problems or issues. And Gary, he's always good for a hug if you're having a bad time or a bad day."

To find out more or just meet some DAV members, head to the Cloquet VFW on 210 Arch St. after the parade Monday. They'll be giving away hot dogs and selling $1 brats until they run out.