'One of the most beautiful sights' 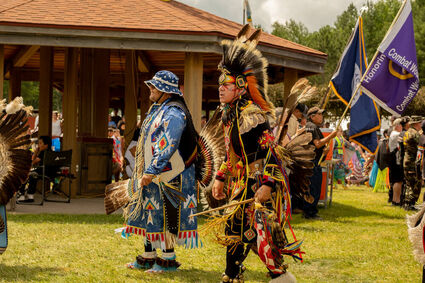 Tony Fish (in foreground) dances during grand entry Saturday at the Fond du Lac veterans' powwow, a three-day event held for the first time since 2019 this past weekend at the Mash ka wisen powwow grounds in Sawyer

The weather was perfect Saturday for the Fond du Lac veterans' powwow - held for the first time in three years after a pandemic hiatus.

First into the circle Saturday were the Eagle flags, each one carried by a veteran, who was named by the master of ceremonies. The eagle flags were followed by the Fond du Lac Honor Guards with a row of cloth flags, including the FDL reservation flag, a Purple Heart flag, flags from each branch of the Armed Services and a POW flag, flags from other reservations and more. After the flag bearers came the storytellers, men's and women's traditional dancers in regalia, jingle dress dancers, shawl and youth dancers to the drumbeat and singing of the Cedar Creek drum group, host drum for the powwow.

"Ladies and gentlemen, you're witnessing one of the most beautiful sights in Indian Country," said first time powwow emcee Chi Ma'iingan (aka Herb Fineday), as the host drum group Cedar Creek kicked off the grand entry Saturday afternoon. As each dancer entered the circular dance ring, they were given a pinch of tobacco, to help them remember "the ones who came before, who danced, who taught them to dance," Chi Ma'iingan reminded the crowd.

The mood was festive as spectators, dancers and veterans turned out in droves for the three-day event. Ma'iingan said people even arrived early, looking forward to gathering after the powwows were canceled in 2020 and 2021.

"It was an amazing feeling walking around the powwow grounds, seeing community members mingling. Everyone was smiling and happy to be there," Chi Ma'iingan said. "You could just feel the energy of the powwow, even before it started."

While the celebration is uniquely Native American, the powwow honors all veterans, of any race, age or service.

Veterans and current service members from Fond du Lac and other tribes were there in force - not surprising, given that nearly one-fifth of Native Americans serve in the armed forces, a higher rate than any other demographic, according to Military Times.

Dressed in fatigues, members of Duluth's 148th Fighter Wing mingled with troops from the Joint Force and 133rd Airlift Wing from St. Paul, who joined the dancers during the veterans song. The Cloquet Combined Honor Guard was there, as were members of the Carlton County chapter of Disabled American Veterans. Many others were there, and they celebrated a veterans song together.

Master Sgt. Alicia Lagarde was one of the 148th members at the powwow. She said it was beautiful. "I love the Native culture and being here, celebrating veterans. It's powerful," she said.

Major Corey Robinson of the Joint Forces agreed. "I love it."

Also a veteran, Fond du Lac Reservation Business Council chairman Kevin Dupuis Sr. shared a word of hope: "As long as we can come together the way we come together today, we can heal ourselves ...."

Fond du Lac honored one of its own on Saturday: Tom Whitebird. The Vietnam veteran and former FDL veterans service officer (VSO) has been struggling with health issues recently. The powwow's organizers dedicated the third song Saturday to Whitebird.

"They played the first song for all veterans, and the second song was for vets around the area," Whitebird said. "The third song they did for me, as a healing song. That was a good one. I had a little bit of water in my eye."

Whitebird told the Pine Knot News that doctors at Mayo had removed a baseball-sized tumor from his brain in April. He remained in the Rochester hospital for 2-3 weeks, then came back north for therapy at Essentia Health in Duluth, where he learned to speak and walk again. He's now using only a cane to help with walking, and his speech is good. But he's still healing, Whitebird said, adding that doctors told him he has only a 0.9-percent chance of cancer. "It's almost zero, but not quite. That's because they couldn't take everything out of my brain."

In his more than 10 years as VSO for Fond du Lac, Whitebird said he tried to advocate for veterans in any way he could. It was a rewarding job.

"I just put my whole heart into helping veterans if they needed it," he said in an interview. "They trusted me too. I didn't only help Fond du Lac veterans, I worked with a lot of others too. If I could do something, I would do it. ... If I wouldn't have had this thing going on, I'd still be doing it."

His fellow veterans did what they could for Whitebird on Saturday. 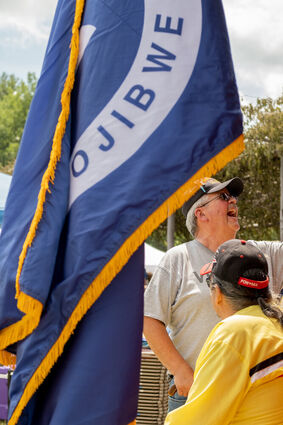 Tom Whitebird was honored with a veterans song for healing Saturday, but also simply spending time with fellow veterans and community members as he recovers from a brain tumor.

"It was really nice when I stood up and saluted them, nice that they did that," Whitebird said. "I was VSO for them too, and they showed appreciation."

Powwow spiritual advisor Skip Sandman said a long prayer in Ojibwe prior to the final veterans song. He explained afterward that he called all the spirits and all the four directions and more, to both watch over the people at the powwow and to take what is wrong from Whitebird, "so he could have a better life."

For a few hours Saturday, the delighted Whitebird reunited with old friends, fellow veterans and even got his photo taken with his friend, Brig. Gen. Sandra Best, who came to the powwow on a Blackhawk helicopter.

Two days later, Whitebird was still basking in the glow of the love and support at the powwow. "It was really good," he said, three times in a row. "I couldn't explain it, but it was good.

"It was really nice having the powwow again, too."